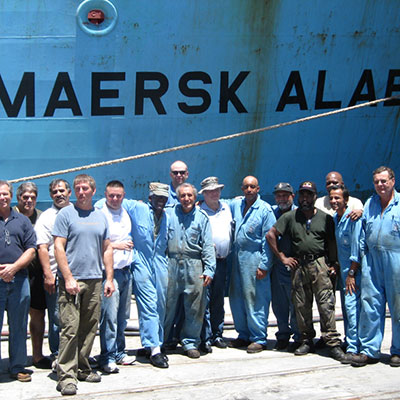 Most injury lawsuits don’t change the world. This lawsuit effectively ended Somali piracy. Brought by nine of the crew members who were attacked by pirates on April 9, 2009, aboard the Maersk Alabama, this lawsuit made the world of global shipping and maritime security recognize the threat of Somali piracy could no longer be ignored or be downplayed. Global shipping companies, governments, the United Nations, and private maritime security firms had to change their policies or risk more kidnappings and lawsuits. Since 2010, combined anti-piracy efforts and updated company security measures have worked in tandem to reduce the number of successful Somali pirate attacks to 0 in 2014.

The story of the hijacking of the Maersk Alabama has been immortalized in the movie Captain Phillips; however, like all movies, it portrays Hollywood’s version of the story. Arguably, there are several sides to every story, and we have been fortunate to be able to listen to and investigate the stories of the nine crew members who filed the lawsuit, as well as those of many of the other crew members and people involved. Their story sheds light on what really happened aboard the Maersk Alabama that fateful day, and how it differed from the popular movie.

On the afternoon of April 7, 2009, as the Alabama was traveling down the East Coast of Africa, toward Mombasa, Kenya, a small boat was spotted following the Maersk Alabama. It was about six or seven miles off their stern, according to the crew, and the emergency alarm was sounded on the ship. The crew went to the deck cargo control room to wait while the ship outran the small, fiberglass boat. It disappeared from view after about twenty minutes.

Early the next morning, one of the crew members, A.T.M. Reza, noticed another boat speeding toward the Maersk Alabama. This boat was much larger than the little skiff that had followed them the day before. Afterward, A.T.M. Reza told reporters that when he informed Captain Phillips there was a boat heading toward their ship, Phillips laughed at him and walked away, saying it could be a fishing boat. A few hours later, the pirates were holding Reza, Phillips, and another crew member at gunpoint, shouting that they would die if they didn’t reveal where the rest of the crew was hiding.

The rest of the crew had hurriedly hidden in the steering room, a swelteringly hot, dark room that lacked food or water. They hid there at the instructions of the first mate, who believed the thick, steel door would provide better protection against the pirates’ machine guns. They didn’t have a safe room on the ship – the crew claimed Captain Phillips repeatedly told them they didn’t need one. The crew weren’t allowed to have weapons on board (a common safety regulation among merchant vessels worldwide), and the ship lacked any defensive technology or hardware to protect them from pirates. A.T.M., who had been held at gunpoint with Captain Phillips in the bridge, was taken by the pirates’ leader, Muse, to go search for the crew. He didn’t know where they had hidden, but when they got to the engine room, next to the steering room, A.T.M. decided to try and escape from the pirate. He had a small knife on him, and he stabbed Muse in the hand with it. Two other crew members helped him tie up the pirate and carry him into the steering room as a hostage. The crew took turns guarding Muse, and about six hours later, they attempted to exchange Muse for Captain Phillips. They released Muse, but the pirates did not release the Captain. Instead, the four pirates left the Alabama with Captain Phillips in a lifeboat.

After the four pirates took off with Captain Phillips, the chief mate called the crew to the bridge, where they saw the lifeboat containing the five men. They waited all night, scared more pirates would come to look for the pirates or attack the ship again. The next morning, they were informed the U.S. Navy was on the way to help them. It was fortunate that the Navy had been in the area with other NATO warships on an anti-piracy operation. The day after, the Navy arrived and 18 armed guards came aboard the ship and traveled with them to Mombasa. A SEAL team rescued Captain Phillips from the lifeboat, killing three of the pirates and capturing the leader, Muse.

The reason the crew was sent unarmed and unprotected into pirate-infested waters was due a contract Maersk Lines Limited had to deliver humanitarian aid and cargo to Kenya. The captain had the option of staying outside the 600 nautical mile safety zone For the April 2009 trip, they hired on an American crew, contracted by Waterman Steamship Corporation, to man the Maersk Alabama for this voyage. However, Maersk did not tell the crew they would be traveling in pirate-infested waters. The crew and captain, all experienced mariners, conducted their typical safety meetings as they traveled through the Gulf of Aden and down the eastern coast of Africa to their destination.

Our research into the events surrounding the hijacking revealed multiple assertions that Captain Phillips did not conduct any pirate-attack safety drills. Captain Phillips, after discussing the route with Maersk, decided that traveling outside the 600 nautical mile safety zone would take too much time and be too expensive. He decided that he would take the ship down a route much closer to shore and to pirates – within 250 nautical miles of the coast in an area where 39 pirate attacks had occurred the previous week.

According to his crew, Captain Phillips claimed he was not scared of pirates and supposedly ignored the pleas from his crew to avoid that route. The crew was completely untrained and unequipped to handle a pirate attack, and they did not want to put themselves, their ship, or their cargo in harm’s way. The attack on the Maersk Alabama was the first time an American ship had been hijacked by pirates since 1821.

From subsistence to raking in millions: how Somalis turned maritime piracy into a multi-million dollar industry

Since 2005, piracy off the coast of Somalia has been a threat to international shipping and commerce. Modern-day pirates in the area are driven by social and economic factors. Illegal dumping of toxic waste in Somali waters destroyed the fishing industry, and the aftermath of civil war led to fishermen forming armed groups to exact justice and defend their territorial waters in the absence of an effective national coast guard. As piracy became more and more lucrative, financial gain became their main objective. They took control of larger, faster vessels and attacked larger cargo ships and oil tankers for ransom and for profit. Their captured goods were sold on the black market and they received large ransom payments from global shipping companies.

Somali piracy quickly morphed into organized crime, and by 2011, pirates conducted 237 attacks on vessels. That year, approximately three to five thousand Somali pirates brought in approximately $146 million – a much bigger payday than they ever would have seen if they’d continued to try and scrape a living fishing toxic waters.

For governments and businesses, global piracy costs about $6.9 billion a year. But countries taking military action to thwart pirate attacks could be seen as encroaching on the sovereignty of Somalia, so businesses invested in high-premium insurance coverage that covered pirate attacks. These policies would pay ransoms in the event of a pirate attack on a vessel.

The UN, NATO, and the International Maritime Organization issued warnings to mariners and recommended that all vessels traveling in the Indian Ocean maintained a distance of at least 600 nautical miles from shore. Many companies maintained their regulations that crews and ships could not be armed, and simply hoped for the best when their ships traveled in pirate-infested waters. From 2005 to 2011, the number of successful pirate attacks increased in tandem with the amount of money being drained from the global economy. Sailors began to dread traveling in pirate-infested waters, and often requested transfers so they wouldn’t have to fear for their lives.

For American sailors, under the Jones Act, companies have an obligation to ensure that their vessels are seaworthy, meaning that, at a minimum, the vessel must be suitable for its intended mission. That means, that if companies are knowingly and intentionally sending vessels into pirate-infested, dangerous waters, they must make their ships suitable for their intended missions. For Maersk, that meant doing more than paying Russian Roulette with their crews by sending them unarmed and unprotected into pirate-infested waters. The crew faced AK-47s armed with only spoons and a few, small pieces of pipe.

Shortly after the crew of the Maersk Alabama returned home, lawsuits were filed against Maersk Lines Limited and Waterman Steamship Corporation (the company who contracted the crew out to Maersk). Nine of the crew members hired our firm with Brian Beckcom taking the lead in the case. We filed two lawsuits, one in Texas and one in Alabama, asserting that Maersk and Waterman had not done their duty under the Jones Act to protect the crew from harm and that they knowingly, intentionally, and willfully sent their employees into pirate-infested waters. We asserted that Maersk and Waterman failed to take adequate steps to provide appropriate levels of security and safety for their employees.

Maersk and Waterman argued that the ship was maintained to industry standards. The “industry standards” that were in place in 2009 were essentially to keep the doors locked, to keep a lookout for pirates, and to have a safe room. No weapons. No security guards. They were sending crews to gun fights armed with spoons.

The defense attorneys fought our lawsuit every step of the way. They fought to have the 2009 lawsuit filed in Texas dismissed, so we filed another lawsuit in Alabama, where Waterman was based, in 2012. The attorneys for Maersk and Waterman focused on dragging out the lawsuit for as long as possible, hoping that the movie Captain Phillips would sway public opinion about the case, swinging the case in their favor if it went to trial.

Over a dozen depositions were taken in the case, and Brian and his legal team filed and responded to dozens of motions and attended many hearings on the case. The defense attorneys fought the hardest to ensure that the facts of the case remained confidential, especially in light of the movie’s release in October 2013. While the information we learned about the hijacking is confidential, we can discuss the impact this lawsuit has had on the maritime industry.

The initial hijacking was a wake-up call for the United States and for the international shipping industry. When maritime piracy (think Blackbeard) was quashed almost two hundred years ago, it was done so through sheer force. The solution to twenty-first century piracy has been the same. Countries stepped up their naval security coalitions, without infringing on Somalia’s sovereign powers, to patrol international waters and be able to respond very quickly to reported pirate attacks. Companies began to employ independent security contractors to protect their vessels and their crews and saw their profit margins improve. By 2014, the number of successful pirate attacks in the Indian Ocean had dropped to zero.