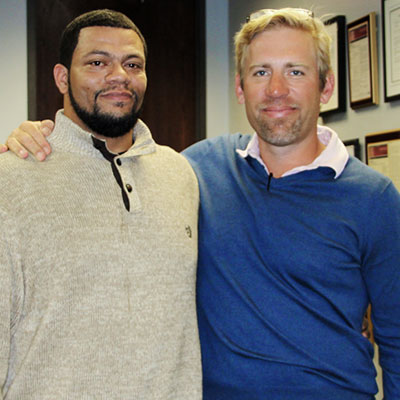 At 37 years old, Keidron had spent nine years building a career for himself working offshore. He enjoyed the work and being able to provide for his family, and he was planning on working offshore for the rest of his career.

He’d worked for ENSCO Offshore for six years, always received excellent work evaluations, and made a point to teach new teammates about safety protocols and procedures they needed to know. Keidron respected the safety rules and exercised his stop work authority when he and his colleagues were at risk for injuring themselves. In short, he was an ideal employee for offshore companies, where safe work environments mean more business.

According to a lawsuit that was recently resolved confidentially, Keidron’s hitch in July 2014 changed everything. He left Houston for his normal 14 day hitch in the Gulf of Mexico on the ENSCO 87 jack-up rig. Two crewmembers were unable to make the hitch, so lots of job assignments were shuffled around to maintain their productivity. A week in, the crew did their short change – where they switched from working days to working nights and vice versa. That day, Keidron worked from 6 a.m. to 2 p.m., and then from 10 p.m. to 6 a.m..  His first shift, starting at 6 a.m., was pulling slips. He and another roughneck were using a manual slip to pull up 5-inch diameter pipes. The slips are big, iron sleeves that grab the drilling pipes, allowing workers to pull them up or push them down using handlebars attached to the sleeves. The slip for pipes that are 5 inches in diameter weigh between 175 and 225 pounds. Keidron and his coworker were pulling the pipes every few minutes for hours.

Betrayed by the safety culture

According to the allegations in the lawsuit, before they started, Keidron asked the driller why they weren’t using the air slips for that job, using his stop work authority. He knew they’d used the air slips before on similar jobs, and the air slips were safer to use when you just had two people manning the slips. He was told to keep using the manual slips. Several hours into the job, Keidron felt something give in his back. But he was focused on his job and figured it was nothing. After he and his coworker broke for lunch, his back started to stiffen up as his muscles cooled down. He grabbed an Aleve off a coworker and went back to work. His back started to throb and he couldn’t get the pain to go away. After his shift, he decided to see if it would get better after resting. It didn’t. He mentioned his back pain to a friend, who flagged down the supervisor so Keidron could report that his back was hurting too badly to go back to pulling slips. He was a team player, and didn’t want to stop working, but rather do something that wouldn’t aggravate his back even more.

After his 10 p.m. to 6 a.m. shift had ended, he went to the medic first thing in the morning. The medic gave him Advil and a heating pad. His supervisor moved him to a different job, where he wouldn’t have to use his back. Keidron then went and filled out an incident report. Up to that point, he’d done everything he was trained to do in the event of an injury. He’d even asked the assistant driller if he should sign the hurt sheet since he was hurting. The hurt sheet is where you sign one side if you worked the shift without getting hurt and the other side if you had gotten hurt. According to at least one witness, the assistant driller cussed him out and told him to not make it a reportable incident since he didn’t have a specific time and date of his injury.

That was the moment where things started to go south for Keidron. Offshore companies often tout their safety records because the safer your company is, the fewer reportable incidents you have, the fewer OSHA violations you rack up, the more contracts you will be awarded. More contracts mean higher profits. If the injury happened at work, it’s reportable. The ENSCO 87 claimed it had more than 1,256 days since a reportable incident clocked when Keidron was hurt. So it benefited the company to have his injury not be reported and to not have to reset that number to zero.

Keidron fears for his job security

Keidron was forced to sign an incident report that said his back wasn’t hurt on the job and was forced to sign the hurt sheet as uninjured for the rest of his hitch. He testified later on, saying, “At that point, I felt my job was threatened and jeopardized… so I left it alone. I just worked because I got a family to support.” He didn’t fight what he was being made to do because he didn’t want to be fired. Because from what he could tell, nothing was broken and there was no massive medical crisis, he could keep working, keep the productivity level up, help out his crew, and provide for his family. For the rest of his hitch, he worked jobs that didn’t require him to do much heavy lifting.

Even though Keidron’s assignments didn’t require him to pull slips, he was seeing the medic every morning to check in and get more Advil. His back wouldn’t stop hurting. He couldn’t get comfortable. The heating pad was only useful when he was in his bunk, and it didn’t provide him any measurable relief. When his hitch ended, his family picked him up and they drove to Destin, Florida, for a vacation they’d planned months prior.

By the time they got to Destin, his back was causing him so much pain he was in tears. His wife drove him to an Emergency Room where he was given a shot for the pain and x-rays were taken of his back. He was given prednisone for the inflammation and muscle relaxants. They helped somewhat, but the car trip back to Louisiana was painful. He went to a clinic back home and was told to rest and to keep taking the medications he’d been prescribed by the ER in Florida.

He was planning going on his next hitch, even thoug he could hardly move. He wanted to keep his job and feared that the incident with the assistant driller had put his job in jeopardy. His wife, a nurse, knew he couldn’t work in the condition he was in and had him call the main office and report his back injury. The same day he reported it, a claims adjuster from R.L. Judge and Associates called him saying he needed to give a recorded statement. The adjuster went to Keidron’s house the next day and sat down and took Keidron’s statement, asking him many questions.

At that point, Keidron’s wife started wondering if ENSCO was going to treat him well or ,since the adjuster had made it sound like he was investigating Keidron, to find out how to blame Keidron for hurting his back. She started researching online to find out if ENSCO had a history of treating injured workers well. She came across our site and saw that we’d handled a case similar to Keidron’s as well as cases against ENSCO. She called our firm, and Brian Beckom talked with Keidron about what had happened and what Keidron’s rights were under the Jones Act.

Workers such as Keidron in the maritime industry, depending on their vessel and their duties, are often protected by the Jones Act. The Jones Act requires employers to provide a safe work environment and to provide proper and immediate medical care in the event of an injury. In Keidron’s case, jack-up rigs and other offshore drilling vessels such as semi-submersible rigs fall under the Jones Act, so ENSCO was required to uphold the law’s strict safety standards.

After the Deepwater Horizon tragedy in 2010, the Obama Administration and companies reviewed and significantly revised safety regulations and reporting requirements to make drilling in the Gulf of Mexico safer for workers and the environment. Despite these increased safeguards, the people who work in the offshore drilling industry are still faced with pressure to not report injuries so the company’s injury record isn’t tarnished. Because offshore contracts are so often decided based on how safe a company’s operations are, and although the main office and the CEO may strive to have their employees prioritize reporting injuries and maintaining safety, the people working offshore fear reporting injuries and jeopardizing future contracts.

The lawsuit alleged that Keidron’s supervisors and higher-ups on the ENSCO 87 pressured Keidron into lying about working hurt and saying he wasn’t injured on the job, leaving him barely able to move. After meeting with Brian, he decided to go ahead and pursue a claim under the Jones Act against ENSCO. He was suffering excruciating pain and he couldn’t jeopardize his family’s health and safety while he recovered. Brian filed a lawsuit in Harris County on his behalf and sent Keidron to see a spine specialist. The specialist ordered an MRI which revealed damage at the L5 and the S1 vertebrae. The discs had ruptured. He underwent physical therapy for 6 weeks that made his back hurt even worse. The injections he received next didn’t alleviate his pain either.

He was miserable. He couldn’t support his family, work in his yard, work around the house, or play with his kids. He underwent surgery on his spine in January 2015. Meanwhile, Brian and his team worked up Keidron’s case, taking depositions of rig hands and crew. After everyone had testified, Brian asserted in a pleading that, “After [Keidron] hurt his back, ENSCO personnel tried to cover up the incident, pressured [Keidron] to lie about it, and then tried to convince [Keidron]  to tell a different version of what actually occurred.” ENSCO had hired a highly experienced law firm to defend these allegations and the lawyers denied the allegations.

Brian hired economic, work safety, and medical experts to review Keidron’s case. The economic and medical experts determined his physical and financial losses, both past and future. The work safety expert reviewed ENSCO’s slip policy and the testimony of Keidron and his coworkers. He determined that even if three people had been working the slips, as they were designed to be used, the weight each person would be lifting was greater than the maximum safe lifting limit determined by the National Institute for Occupational Safety and Health.

The work safety expert further determined that even if they’d had three people working the manual slips, they didn’t have enough people to do the job safely and that air slips, which were available for use on the 87, were the safer option according to the safety hierarchy. Also, because the driller controls pulling and setting slips, it was the driller’s job to prevent the rig hands from performing a procedure that is known in the industry to cause serious injury. ENSCO denied all these allegations and hired its own expert to controvert Keidron’s experts.

Brian took the testimonies of Keidron and his coworkers and the experts’ reports and mediated Keidron’s case. Within nine months of hiring Brian and the team at VB Attorneys, the case settled out of court under terms that are confidential.

If you think you have a Jones Act claim, contact our experienced maritime injury lawyers. We will fight for your rights.