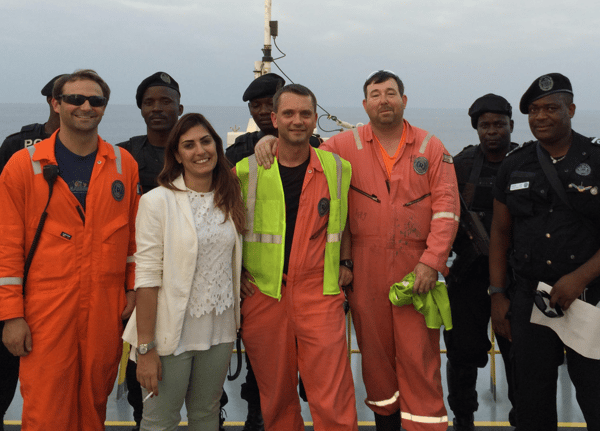 Amid financial struggles, Rowan Companies decided to bend safety rules by instructing mariners to work shorthanded during a mutiny by Angolan workers. Our client named Buckey, a seasoned crane operator, suffered a career-ending back injury after being ordered to move heavy cables into a D-ring, a task that typically requires multiple workers. Maritime lawyer Brian Beckcom and VB Attorneys helped Buckey get the medical care he needed and negotiated a big settlement despite Rowan Companies’ bankruptcy.

Our hardworking Jones Act client Buckey was an offshore crane operator working off the coast of Angola when he injured his back. Mid-bankruptcy, Rowan Companies was struggling to maintain profitability and decided to side-step the wages of dozens of Angolan workers, leading to a mutiny on the vessel. With the Angolan workers refusing to work and in an effort to minimize costs, Rowan Companies instructed American workers to perform jobs outside of their job description.

With the vessel undermanned, our client was tasked with duties outside his realm of crane operating duties, including hooking heavy cables onto pallets for crane operations. As a crane operator, Buckey was largely a sedentary worker who had little to no experience performing labor-intensive tasks on the vessel. As Buckey did his best to lift and maneuver the large cables on his own, he suffered multiple herniations in his spine, causing excruciating pain and permanent damage.

Maritime lawyer Brian Beckcom filed a Jones Act lawsuit against Rowan Companies for gross negligence and “unseaworthiness.” Seaworthiness is an essential concept in general maritime and admiralty law. Simply said, unseaworthiness refers to a vessel that is unfit to perform its intended purpose. Maritime companies have a duty to provide their workers with a seaworthy vessel which includes a duty to supply an adequate and competent crew.

Due to the terrible state of Rowan Companies’ records, our team worked extensively to uncover evidence that was hidden, old and unorganized, or otherwise denied by the defendants. Rowan Companies attempted to argue that the accident that derailed Buckey’s offshore career was “unavoidable.” However, their defense failed to provide any evidence that something other than its own negligence caused Buckey’s injures.

Brian Beckcom and our team at VB Attorneys spent countless hours collecting the necessary evidence needed in order to prove negligence and unseaworthiness in a court of law.

After his back injury, our client Buckey was left unable to work and struggling to pay for the medical procedures he needed to recover. Buckey underwent countless physical therapies, a thoracic surgery, and a major lumbar surgery. He was struggling to get help from his employer, worried about his family’s financial security, and felt helpless as his medical bills piled up before his eyes.

Rowan Companies refused to pay Buckey's medical bills or provide him with any financial assistance despite having a lawful duty to provide him with maintenance and cure. Board-certified personal injury lawyer and maritime law expert Brian Beckcom battled Rowan Companies’ insurance adjusters and negotiated a big Jones Act settlement for Buckey and his family. Our maritime lawyers are proud to have helped Buckey find justice and secure the compensation he rightfully deserves.