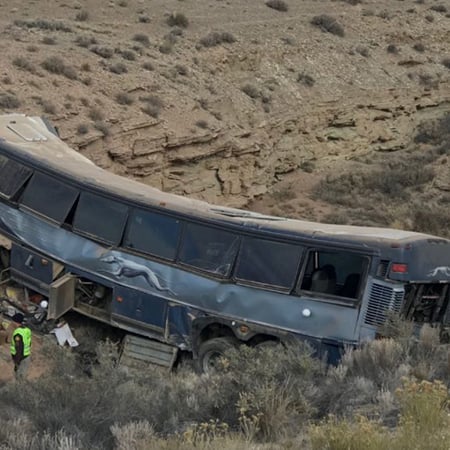 The bus was traveling through Emery County on its way to Las Vegas when it left the highway around 11 p.m., crashed into a steep wash, and came to a stop about 200 feet from the road. A thirteen year old girl, identified as Summer Pinzon, of Azusa, California, was pronounced dead at the scene. Her mother was injured and remains hospitalized.

Investigators removed the wreckage of the bus Monday night so that mechanical experts could examine it in the nearby city of Green River. Investigators are trying to obtain video from a camera in the bus to help determine what happened. Greyhound is conducting its own investigation into the crash and is cooperating with authorities.

Greyhound has history of crashes caused by unsafe drivers

Investigations have uncovered driver fatigue in multiple recent Greyhound crashes, including in the 2013 Pennsylvania I-80 wreck in which our client suffered catastrophic injuries. A 2016 CNN report outlined how Greyhound, despite citing safety as a priority, fails to enforce its own rule related to driver fatigue. The rule, G-40, requires drivers to stop every 150 miles, get out and walk around the bus, stretch, as well as check the tires to mitigate fatigue. CNN reviewed Greyhound’s posted routes and revealed several of them fail to enforce  this 150 mile safety stop rule.

A 2012 government study found that 37% of all passenger bus crashes – including Greyhound crashes – were due to driver fatigue. In January 2016, a fatal wreck occurred near San Jose, California. The Greyhound bus driver told a California Highway Patrol officer they were fatigued before the crash. The company failed to correct the issue of driver fatigue after the fatal wreck in 2013. While we don’t know if the cause of the January 1, 2018 wreck is due to driver fatigue, we know Greyhound has a history of failing to enforce its own safety rules. An independent investigation will help the families of the Utah crash find out why this wreck occurred.

Greyhound knows that victims and families are focusing on recovering in the days following a wreck and will use that time to get a head start on finding ways to minimize or eliminate your claim. Getting help from an experienced bus accident attorney as soon as possible will mean you can focus on recovering while your legal team gets to work finding answers and protecting your claim.

To find out more about how we help Greyhound bus crash victims and their loved ones, contact us at 877-724-7800 or fill out a contact form.