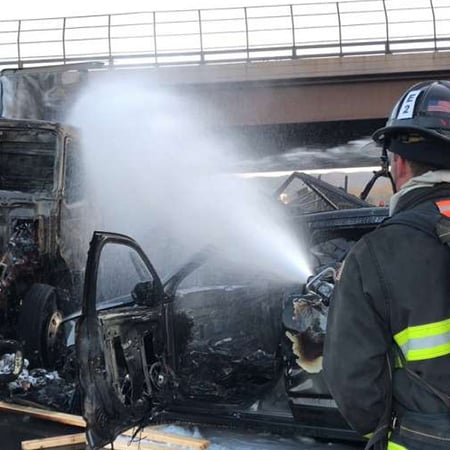 Fatal I-70 crash was not "an accident" - VB Attorneys

On April 25, 2019, an 18-wheeler slammed into a group of cars that were stopped in traffic on Interstate 70 just west of Denver, Colorado. 28 vehicles were involved in the wreck, including other semi trucks. A fire broke out, and four people were killed. Four days later, Robert Corry, the attorney for the truck driver responsible for causing the fiery crash, said, “It was an accident.” He compared the wreck to a “surprise situation.”

People responsible for causing wrecks must be held accountable

The word “accident” implies that nobody is responsible. The National Highway Transportation Safety Administration studied the factors behind car crashes and found that 94% of of wrecks are caused by human error. Somebody, somewhere is responsible for the deaths of four people and the injuries of at least ten people. Choices were made, actions were taken or not taken. By people.

In 18-wheeler wrecks and commercial vehicle crashes, the number of people who could be responsible for a wreck grows much more quickly compared to a regular car wreck. For one thing, commercial vehicles are held to a higher safety standard, as are their drivers and the companies behind them. Truck drivers are trained professionals. Their companies are required to hire safe, professional drivers, supervise them properly; make sure they receive all the safety training they need to continue to do their job safely; and make sure their equipment is in safe, working order.

As investigations into this wreck progress, the number of companies and people who could be responsible for this wreck might increase. If the brakes were defective and the manufacturer failed to warn the trucking company, victims and their families might have a case against the manufacturer. If the repair shop failed to report that the brakes were bad, they might be partially responsible for the wreck. Getting justice after a wreck as complicated as this one requires the help of attorneys who have experience handling very complex cases.

The truck driver in the April 25, 2019, crash was arrested and charged with four counts of vehicular homicide. The truck driver told investigators his brakes failed just prior to the crash. He is employed by a company based out of Houston, Texas.

His employer, Castellano 03 Trucking, has a history of safety issues. Safety inspection records from the Federal Motor Carrier Safety Administration reveal that Castellano 03 Trucking has violated truck safety rules 30 times since late 2017. And at least 10 of those violations include issues such as “brake tubing and hose adequacy,” “brake out-of-adjustment.” One violation from December 2018 reports, “Driver cannot read or speak the English language sufficiently to respond to official inquiries.”

Castellano 03 Trucking’s history of violations and of hiring drivers who cannot speak English well enough to talk to safety officials gives us reason to believe the company is more concerned about making a profit than about the safety of their drivers and the people sharing the road. Good, safe trucking companies don’t have inspection records like that. Good, safe drivers won’t work for companies with safety violations.

Companies that fail to make sure their trucks are safe are putting their drivers at risk. And, by extension, they’re putting all of us at risk, too. The I70 crash was a matter of when, not if, based on the company’s track record. That’s why the truck driver’s attorney was wrong when he called the wreck an accident.

The law protects people who are injured by dangerous trucking companies and truck drivers. The I70 crash victims and their families have the Constitutional right to be compensated for the harm caused by Castellano 03 Trucking, the truck driver, or any other party found to be responsible for the crash. You have the right to conduct an independent investigation in order to determine who is responsible for your losses, injuries, pain and suffering, mental anguish, and more. You have the right to your day in court – to make your case to a jury.

Cases like these can be important for victims and the families of people who were killed. They can help you send a message to the responsible parties that their dangerously unsafe behavior is not allowed to continue.

Of the several reasons to consult an attorney as soon as possible after a crash like this is, making sure all the evidence is preserved and protected is the most important thing a lawyer can do. At our firm, when we are asked to help people with catastrophic injury and death cases like this one, we get to work right away. We file a Temporary Restraining Order to make sure all of the evidence is safe – to prevent it from being damaged, destroyed, or lost. We also hire independent experts to investigate the case and examine all of the evidence.

Trucking companies and insurance companies know one language: money. That means, if a company is putting profits over safety, you sue them for money in order for them to get the message that they must stop this behavior. The truck driver in this case is being criminally charged over the deaths of four people. But that means everyone else responsible for this wreck will continue doing business as usual.

It takes thousands of hours of work and a significant amount of money to hold these companies accountable. That’s why only a few law firms are actually qualified to handle cases as complex as this one. It takes a track record of winning record-breaking verdicts and settlements in 18-wheeler cases and wrongful death lawsuits to get justice for you and everyone injured or killed in this wreck.

To consult our team about how we can help you get justice after this wreck, call us at 877-724-7800 now to get started. You may also fill out a contact form on our website. We will answer all of your questions, help you understand your legal rights, and help you make an informed decision about your next steps.