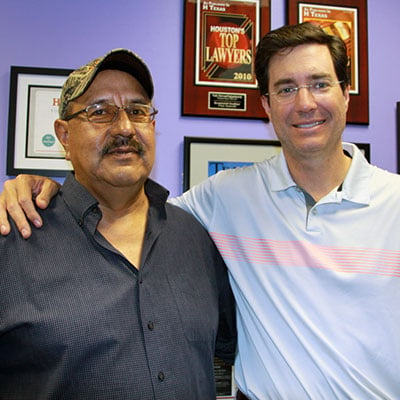 On February 8, 2011, a massive explosion and fire rocked the Southeast Texas community of Mont Belvieu at 12:18 p.m.. The explosion occurred at an Enterprise Products petrochemical facility in the community that stores extremely flammable hydrocarbons. Killing one person and injuring dozens more, the incident sparked a massive response from the Texas Railroad Commission and OSHA, as well as from the workers and their families.

Our firm was hired by 43 of the workers from the Mont Belvieu plant who had been injured escaping the explosion. We filed a temporary restraining order against Enterprise the day after it occurred to preserve evidence and to ensure the results of the governmental investigations into the accident were shared with our clients.

The Texas Railroad Commission had initially claimed jurisdiction over the explosion, and although OSHA successfully obtained a warrant to investigate the explosion on February 15, 2011, nobody was able to actually investigate anything until March 29, 2011. The plant’s emergency shut-off system was leaking hydrocarbons, and Enterprise had to fix that problem before anyone could access the scene of the incident.

Finding the pieces of the puzzle

Enterprise had hired a workover crew from Turner Industries to clean and repair a wellhead on the #2 well six weeks before the accident. Using Enterprise’s procedures, they’d disconnected the relevant line from the empty well and had recently finished up purging the line of any hydrocarbons. What was de-energerized was the underground header. The above-ground headers remained online and energized with hydrocarbons. On the 8th, the crew began installing the metal blinds between the flanges on the line to create safeguards for when they worked on the wellhead itself. The crew used a “Pop-It” tool to force a gap between the flanges. The “Pop-It” exerted 30,000 to 40,000 pounds of force on already pressurized piping.

The amount of force being exerted on the line that was already pressurized to 1,200 pounds overstressed the line so much, since they were doing this repeatedly to multiple flanges on that section of line, the pipe overstressed, fractured, and released pressurized hydrocarbons that then ignited.

What was discovered during the investigations into the cause of the accident was that there was a safer way to do that job. Enterprise had known since at least 2009 that the physics of installing the blinds rated by ANSI (American National Safety Institute) to be the right size for for the pipe diameter was faulty. The way that part of the storage area was built, the pipes and headers had no room to allow the external forces being exerted on them to move safely through them. They were set up too close together and they were bound by other pipes as well as buried partially underground.

Enterprise, in addition to knowing that they needed a different blind for these projects, knew that their procedures weren’t keeping workers safe:

These two incidents combined with the safety survey should have been huge red flags for Enterprise to take action, engineer thinner blinds, review safety procedures, and make sure they were operating in the safest manner possible.

When the results of the two investigations were issued in April and May 2011, the Texas Railroad Commission declared that, while the facility had suffered $20 million worth of damage, Enterprise was found to be in violation of safety laws in 25 separate instances. The OSHA report cited Enterprise 5 times for safety violations, and fined them $35,000. The investigations had unveiled a massive failure in the piping that was determined by experts to have been caused by applying too much force to the pipes. Enterprise denied the violations, and denied being liable for any injuries or deaths.

While, thankfully, the explosion occurred during most workers’s lunch shifts, the hundreds of workers at the plant went into fight or flight and ran for their lives. They knew it was a matter of time before the entire plant – including them – went up in flames. That was drilled into them whenever they started working in the petrochemical industry, the need to get away from an explosion immediately. But in doing so, they moved, torqued, twisted, and over-extended their bodies beyond the limits in their efforts to flee from danger.

Several of our clients required surgery on permanently injured body parts, and many suffered permanent, disabling injuries that required physical therapy and treatment. Many of our clients also suffered from PTSD, had recurring nightmares about getting trapped in the Mont Belvieu facility, and feared working at another petrochemical facility in case a similar incident occurred in the future. They had all worked at the Enterprise facility as contracted employees to build scaffolding, work as boilermakers, fit pipes, be electricians, and work as insulators. They’d spent their careers in the petrochemical refinery industry, and had planned to keep working in the industry for the rest of their careers.

OSHA’s report found that the Turner employees installing the blinds were not instructed on what level of force to apply and that Enterprise did not supply a procedure for the workers to follow so they would avoid overstressing the pipe. While the contracted employees had depressurized and cleared one section of pipe of hydrocarbons, the rest of the facility was still online, a decision made by Enterprise’s production people to avoid negatively affecting production and profits while the maintenance work was done.

An examination of Enterprise’s Process Safety Management program revealed that there was a conscious, deliberate, and intentional decision by Enterprise to conduct maintenance activity while hydrocarbons were in the header. In addition to revealing that the Process Safety Management guidelines were not followed, Enterprise’s operations manager testified that it was Enterprise’s policy to ensure that all piping in the area on which work is conducted, such as inserting blinds, is free of hydrocarbons. Meaning that they should not have kept the nearby headers pressurized with hydrocarbons while the Turner crew was inserting blinds.

With both Enterprise and Turner continuing to deny any liability, an independent safety report had been conducted at the Mont Belvieu facility by an outside safety company. The report concluded that there was some awareness of top risks but there was no formalized process to mitigate risks. It also stated that risk control was not prevalent, that it was unclear if safety critical equipment had been adequately defined, that people were not accustomed to working with procedures, and that a culture of not following the rules. In fact, it concluded, there was no accountability for not following the rules.

By the fall of 2012, the widow of the Turner worker who died in the explosion had settled her case. For procedural reasons, we re-filed our case in Chambers County District Court and continued to work up our case. Because the wrongful death suit was unable to name Turner as a defendant, we were now able to add Turner to our suit since our clients worked for other companies and were contracted to work at the Mont Belvieu facility at the time of the accident. In November of 2012, Enterprise responded to the Texas Railroad Commission’s report on the incident, denying that the West Storage Terminal, where the #2 well was located, fell under the Commission’s safety requirements. Although they continued to deny that they were required to comply with the regulation, they did say that the West Storage Terminal would be rebuilt in adherence to the Commission’s safety regulations.

Once it was determined the Turner Industries workers were responsible for the failure of the pipe that released hydrocarbons and caused the explosion, we added Turner as a defendant in our lawsuit against Enterprise Products. Turner denied any liability, arguing that Enterprise had controlled the work – that they provided the supervisors, the policies, and the tools for the job. Turner had been providing maintenance workers to the Mont Belvieu facility since 1999, so with over twenty-two years of experience staffing people to this one facility, and with over 18,000 employees at more than 250 locations throughout the United States, it was logical that they would have trained their workers to be conscious of the potential for a job at a petrochemical plant to be dangerous.

Putting the pieces together for our plaintiffs

We continued to take more depositions and conduct more discovery on the case. It was decided by the judge that a bellwether group of plaintiffs would be chosen to represent the whole group of 43 people if the case went all the way to trial. In March of 2013, seven plaintiffs were chosen as the bellwether group. Their cases were examined by our experts as well as the defense’s experts and we prepared to go to trial in October of 2014.

Before trial, we set a date to mediate the case. At mediation, in September 2014, both sides sat down and told their versions of events to an impartial mediator. We went over our experts’ reports and discussed how even though most of our clients were more than half a mile from the site of the explosion, their fight or flight responses were appropriate to the gravity of their situation. They believed their lives were in imminent danger, and they did everything they could to reach safety, injuring themselves in the process.

The case didn’t settle at mediation, and we were ready to take it to trial the next month. Two accidents in same area the two years before the explosion should have been enough warning that there were issues with Enterprise’s Process Safety Management guidelines and that the company had not taken measures to protect the people working at the facility from danger. In addition to Process Safety Management issues, the company had made the decision to keep the aboveground headers pressurized and full of flammable hydrocarbons while the Turner crew was inserting blinds. Another case of a company putting profits before people, we were confident a jury would not look favorably upon the defendants. The case settled a few weeks before trial was slated to begin for a confidential amount out of court.

For many of our forty-three clients, the accident was eye-opening about the types of work they really wanted to do, their life goals, and what they wanted to do to help protect their families if the unthinkable ever happened. One client, with the help of his settlement, is building his dream home for his family, another client became a safety manager to prevent other people from getting hurt, and many more made strides in their careers to ensure they were able to work in safer environments.

One of our clients, Gary, was a chemical process operator when he was injured in the explosion. He sat down with us after the case settled to talk about his experience working with us. He says:

“I just want to say thank you to the law firm of VB Attorneys. I was hurt in an accident in 2011, and I was referred to this attorney because they thought – they knew – that this firm was a very good firm. And I’m glad that they did refer me to them. It’s been about four years with this case. It’s been a drawed-out, long ordeal, but the law firm of VB Attorneys helped me through this process, this lengthy process, in a smooth-process way.

“I very much want to thank the attorney, Kenneth, for his help and his concern and his caring about my well-being just as well. He didn’t look at me just as a person of gain, he looked at me as his friend. And I appreciate that.”