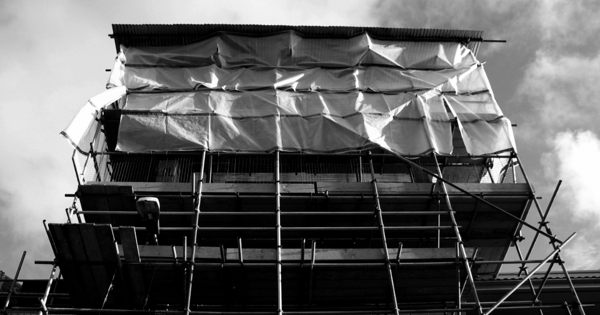 David Sanchez, a US veteran, and father of three worked as an electrician. He fell off of a scaffold after being instructed to change out a dock light without being provided a safety harness or any fall protection. As a result of the fall, David suffered from life-threatening injuries and was diagnosed as an incomplete quadriplegic. David was an independent contractor, and the company that hired him refused to take accountability for their negligence, leaving David’s fate to hang in the balance.

Nobody wanted to help David; his medical expenses were a million-plus, his case was an uphill battle, and the future was uncertain. That’s when VB Attorneys and work injury lawyer, Julian C. Gomez stepped in. With a bit of patience, a lot of hard work, and tremendous legal prowess, our team of worker injury lawyers helped David win his case, take care of his medical bills, and receive the compensation that he was rightfully entitled to.

David was wary about using a ladder, and instead, he climbed a nearby scaffold that had already been erected. The nearby platform was positioned in such a way that it made it easy for David to climb and reach the dock light that needed to be replaced.

Circle R. Electric owned safety harnesses and other safety equipment but failed to provide David with any kind of fall protection. A police investigation found Circle R. Electric entirely at fault and identified three separate OSHA guidelines violated, any one of which could have prevented David’s injury.

Without proper safeguards and without access to fall protection, an accident was inevitable. Today, David suffers from chronic pain, depression, and anxiety. As an incomplete quadriplegic, David has lost all independence and is entirely reliant on his wife. He spends most of his time confined to a bed or wheelchair.

As a person with quadriplegia, David was, of course, unable to return to work. The extent of his injuries left him unable to provide for his family, and all he could do was watch as the medical bills piled up, burdening his family. David tried reaching out to several lawyers in hopes that he could pursue a personal injury case against Circle R. Electric, but no one wanted to help. David’s medical bills were well over a million, and building up liability in this kind of case was no easy feat.

When David first came to our firm for help, we explained the facts to him. As a firm that values integrity above all else, it was important that we were honest about the possible pitfalls in his case. With that said, our team quickly got to work and never stopped hustling. Our team investigated the incident tirelessly to gather the necessary evidence to hold Circle R. Electric accountable for its misconduct.

Founding partner of VB Attorneys Brian Beckcom worked together with Julian C. Gomez to build up a strong case of negligence against Circle R. Electric. Furthermore, our work injury lawyers used their expertise to fight the liens on David’s medical bills to ensure that he received the most money possible. The execution needed to be flawless, and we’re proud to say that it was. VB Attorneys settled David’s case for $1 million, putting $500,000 in the hands of David and his family.