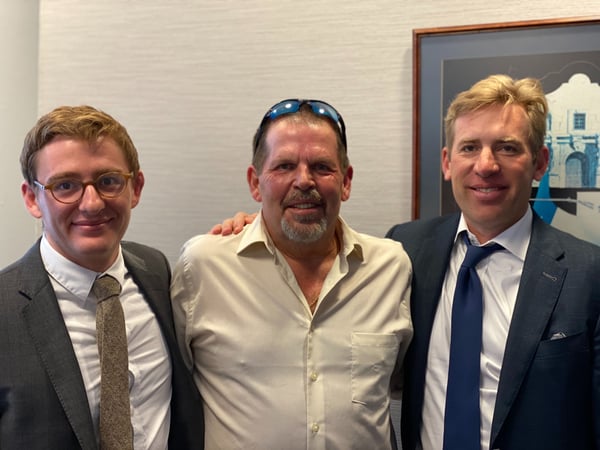 Curt worked offshore as an HV electrician for a prominent maritime company. Marine electricians like Curt are responsible for installing and maintaining the wiring and electrical systems on ships that deliver energy to the boats or offshore rigs.

In September of 2017, Curt thought he had pulled a hamstring while attempting to lift a 200+ pound inverter. The worst was yet to come. Curt didn't know at the time that the injury would turn out to be far more complex and threatening than a pulled hamstring.

Curt’s superiors had carelessly done away with the breaker carts that could have been used to facilitate the transportation of inverters, like the 200+ pound inverter that caused Curt’s initial injury. This forced Curt to lift the heavy inverters up a few steps, in and out of small spaces, and through multiple doors just to get them to the high voltage rooms where they needed to be.

Curt was setting down an inverter when he suddenly felt a sharp pain run down his right leg. The engineer who was helping Curt move the 200+ pound inverter immediately noticed Curt’s discomfort. Curt’s Chief Engineer was made aware of the incident but never made an effort to provide him with any medical attention. Despite Curt’s suffering, an incident report was never made.

In February of 2018, Curt encountered a life-threatening incident aboard the rig where he became wedged against the mast of a 160-ton crane. Curt was consistently forced to climb approximately 20 to 30 feet into the air and off the deck to routinely change out the navigation lights which would go out every week or so.

Curt made it clear to his superiors that the navigation lights should be replaced with more efficient, longer-lasting, LED lights but his requests were denied because his company chose to penny pinch and put profits over the safety of their employees.

As Curt was being lifted to switch out the navigation lights, the main cable and the safety cable of the crane had become entangled with one another causing the crane’s basket, where Curt was, to violently shake. As a result, Curt was banged up against the mast of the crane repeatedly. That day, the tag line, which was supposed to be used to keep him steady as he was lifted up into the air by 20 to 30 feet, was not used by the roustabouts or deckhands.

Once again, the negligence of his employer had put Curt in harm’s way.

Working Through The Pain

After enduring painful working conditions for months, he finally decided to consult with a doctor. It was then that Curt found out that his health concerns were far graver than a hamstring injury. Curt was suffering from a torn disc. In fact, Curt’s disc was torn so badly that he developed claudication, a condition in which the disc fluids block the spinal canal completely, causing excruciating pain.

Curt, like his co-workers and many if not most other mariners who are forced to work in unsafe conditions, feared for his financial security. Curt did not want to lose his job or worse be blackballed. But as Curt’s pain continued to exacerbate, he knew he could no longer remain quiet. That’s when Curt decided to contact our law firm.

Curt’s employer, like many other offshore companies, has a history of bad safety culture. For example, the “mandatory” safety meetings were being ignored regularly as work requirements often prevented workers from even having the time off to attend them. Superiors would sign off on safety training logs without any actual attendance. And safety training exams were regularly beguiled to make sure everyone passed.

In Curt’s case, just like in the thousands we’ve seen defending offshore workers, his employer’s negligence was actively putting workers in harm’s way. There was a complete and total lack of integrity or care for the safety of their employees. The more we investigated the more evidence we found of his company prioritizing profits over safety. Frankly, Curt is lucky he called us when he did because offshore companies are notorious for destroying evidence after offshore injuries.

Brian Beckcom, a Houston personal injury lawyer for two decades, is a leading authority in maritime law. Brian filed a Jones Act lawsuit against Curt’s employer. He and our team at VB Attorneys was able to negotiate a winning settlement on behalf of our client, Curt. Our law firm was able to help Curt win the compensation he deserved so he could secure his family's financial future.