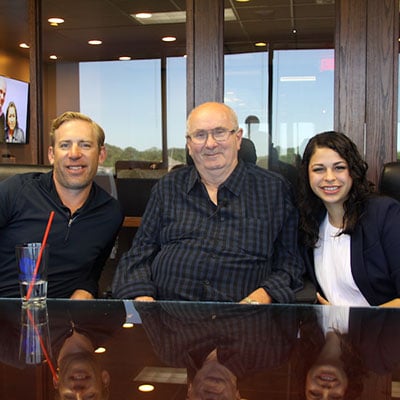 “They were going to unplug him.”

“They were going to unplug him,” Joy told us as she recalled why her mom contacted us in February 2015.

Joy’s dad, Odis, had been in a coma for six weeks after contracting botulism on a tugboat. His company denied the worker’s compensation claim the family filed, which meant Odis was being treated under Medicare. Medicare has a policy of taking people off life support after six weeks if they don’t show signs of waking up. But Odis wasn’t in a regular coma. His body was slowly recovering after being paralyzed by botulism. His family knew he just needed more time to come back. They knew he was strong enough to beat the toxin.

They were desperate. They knew they had to act fast and get help to keep Odis alive. They knew the only place he could have gotten sick was at work. Odis worked in the maritime industry for nearly four decades so his family knew how the company was supposed to respond when an employee is hurt or gets sick on the job. They knew they needed to hire a great maritime lawyer to force the company to take over Odis’ medical care and give him a fighting chance. They knew if they got us involved, Medicare couldn’t unplug him.

We got to work right away. Odis needed time, so we did everything in our power to give him that. We filed a Jones Act lawsuit against his company and made sure they obeyed the law and provided Odis with top-notch medical care. While Brian Beckcom and Lena fought the company in court, Odis was fighting the neurotoxin and was getting better, bit by bit. The paralysis was receding.

The human cost of failing to respond to an emergency

It takes an incredibly strong person to survive botulism. It takes an even stronger person to stand up to the company that treated him like family for thirty-five years and make them take responsibility for failing to respond when he contracted the neurotoxin.

Odis spent most of his life on the Mississippi River piloting tugboats. He loved the river and couldn’t imagine any other life. Odis had been with the same company for almost half his life.

After a brief retirement in 2010, Odis had come back to work for the company as a relief pilot. He now worked thirty days on and then had a month off. In early January 2015, he had driven from his house in Texas to Mississippi, where he joined the rest of the crew to drive to Illinois to meet the tugboat. When he’d boarded the tugboat, he’d grabbed a snack out of the fridge in the galley.

Overnight, he started showing symptoms of what the crew thought might be a stroke. Before his shift the next day, he told the captain his vision was blurred, among other problems. The captain made him work his shift even though Odis couldn’t see clearly enough to drive the boat. He was incapacitated – in no shape to be at the wheel. Nobody called 911, even though they were very close to dozens of some of the best hospitals in the country.

Nobody else in the crew or in his family got sick.

Maritime companies must follow the Jones Act, which requires them to make sure their vessels are seaworthy and their crews have the training they need to handle any emergency. They must keep their workers safe. They must make every part of the vessel safe.

Blind to more than botulism

Our investigation revealed the company didn’t have any protocols for food safety. And we already knew the company didn’t train their employees how to respond to emergency medical situations. In fact, a few years ago, we represented another employee of this same company. Our client had an eye infection that caused his eyelids to swell and lose most of his vision. This infection started during his hitch aboard one of the company’s tugboats. He told the captain right away. The captain and the company made him finish his hitch, then drive a crew van full of employees across Houston in rush-hour traffic. While nearly blind. Instead of calling 911 and having an ambulance pick him up at the nearest dock, the company let him work blind then drive blind – after dropping off the crew, he had to drive himself to a company clinic.

It took our help to get him the right medical care and get most of his vision back. It took our help for him to prove the company had failed to respond appropriately to his medical emergency.

Marine companies must train employees how to respond to medical emergencies and how to get fellow employees emergency medical care when they need it. The law was on our side in both cases. And we had evidence that this company had a pattern of failing to take any measures to protect employees in any type of medical emergency.

Odis had been loyal to his company for over thirty years. They were like family to him. But in the end, they betrayed him.

When Odis went back to work after his brief retirement, he felt like he was 30 again. At 70 years old, the opportunity to make good money coupled with a good schedule was an offer he couldn’t refuse. He loved being on the water again. When he wasn’t piloting barges up and down the Mississippi, he would sit by the lake near his house and fish. The river was in his blood.

He first started working for the company in 1979. At 36 years old, he was already a pilot. He spent over three decades piloting vessels for this company until their negligence nearly cost him his life.

To make things right, we had to take on and confront people who were like family to Odis. The company tried to use Odis’ loyalty to get him to drop the lawsuit. The company, even when faced with the truth of how much they failed Odis, refused to do the right thing.

What the company didn’t take into consideration was Odis’ inner strength. In the two years since he’d been diagnosed with botulism, he lost his wife and his health. He was stuck in a motorized wheelchair, trapped in his own body. But he refused to give up.

Odis knew from experience that the company would try to get out of doing the right thing. He had been a witness in other lawsuits filed against the company and knew what to expect from them.

Shortly before a scheduled trial date, the case settled for a confidential amount.

Brian and Lena sat down with him after his case settled and talked about how we helped him and what advice he has for others:

Odis: “Yeah – I really appreciate everything y’all have done. Brian, everybody. They’ve helped me out a lot and took care of me and everything.”

Brian: “So, Odis, one of the things we like to do at the end of these cases , uh, is kind of ask whether you have any advice, having gone through the lawsuit process and kind of seeing what happens. If you have any advice for anybody that might be looking at going through a similar situation as yours.”

Odis: “Hmm. Well, you know, I’d give them advice to contact y’all. That y’all are good lawyers, you know. That’s – I mean, I’ve had a lot of questions myself you know to ask about things and stuff that I couldn’t answer by myself if it wouldn’t be for y’all, you know. So I’d recommend ‘em, you know, to, as one of the things you know, to talk to y’all about it but – uh – the thing that I’ve got, that botulism stuff, is real rare.  And I don’t know what to tell people other that just watch what they eat you know about that. Because I’ve been through a lot of stuff, you know that, and I wouldn’t wish this stuff on anybody.”

Brian: “Thank you again for – for – letting Lena and I represent you.”

Odis: “Well, thank you and Lena both, all of you, for helping me get through all this stuff. Y’all have helped me out a lot.”

If you are in need of a maritime injury lawyer, our team at VB Attorneys will fight for you. Contact us or call us to get the results that you deserve.