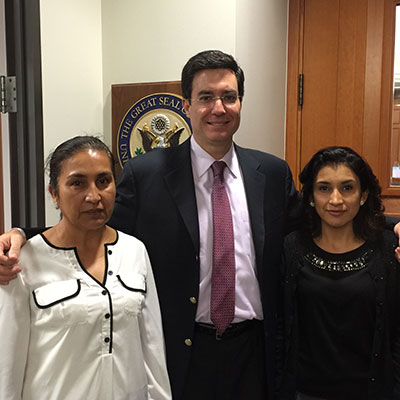 On Thursday, April 14, 2016, a Harris County jury returned a nearly $18 million verdict in favor of the family of an ironworker. Jose Dario Suarez, 55, drowned during the construction of the pedestrian bridge for Baylor University’s football stadium in January 2014. His family filed a wrongful death lawsuit against the construction companies.

Mr. Suarez was tied off in a boom lift that was located at the corner of a barge on the Brazos River. The boom lift went off the barge with Mr. Suarez and a fellow ironworker in it. Mr. Suarez was unable to free himself and drowned. He was 55 at the time of his death, leaving behind a wife of more than thirty years, two daughters, and a son.

The family desperately wanted answers yet unfortunately they never received any. They feared the companies were hiding something and were trying to avoid taking responsibility for Jose’s death. They hired Vuk Vujasinovic to help them find out who was responsible for Mr. Suarez’s death and to determine why appropriate safety protocols were not in place that would have prevented his death from occurring.

Vuk led the investigation, which ultimately spanned more than two years. Thousands of documents were uncovered and analyzed, including documents showing that one of the Defendants, Austin Bridge and Road, kept certain important safety rules hidden from the workers in the field due to a desire to speed up the job.

Four defendants shared our argument that Austin Bridge and Road was responsible for Mr. Suarez’s death

Only through trial were the plaintiffs able to show that Austin Bridge and Road was responsible for Mr. Suarez’s death.  Austin Bridge and Road fought to avoid taking responsibility for their negligence, arguing that it was the other worker’s fault or that the Genie lift was defective in some way. The evidence in the cases put on by the plaintiffs and the defendants proved that two of the original seven defendants did not contribute to the safety lapses that caused Mr. Suarez’s death. Core Safety and Robishaw Engineering were released by the judge before the jury began their deliberations.

In a unique turn of events, Austin Commercial, Derr and Isbell, Flintco, and Genie/Terex argued that Austin Bridge and Road was responsible for Mr. Suarez’s death and that the company failed to follow safety rules about which the company was informed years before the Baylor construction project began.

Austin Bridge and Road’s construction expert flips on the stand, siding with plaintiffs

With the additional evidence that the boom lifts were not chained to the barges and that they had been driven all around the barges on a daily basis, Mr. Bernal flipped his testimony on the stand to say that Austin Bridge and Road had not been acting reasonably and prudently.

The family of Mr. Suarez also testified, saying that he was a good husband and father. He worked hard, always looked to the future, and called his wife and children every day – no matter how far from home his job took him – to check in on them. He was beloved by his family, and their testimony showed that he loved them very much. The forensic pathologist who reviewed Mr. Suarez’s autopsy report testified that Mr. Suarez was conscious for a minimum of 2-3 minutes underwater, knowing that he was going to die.

Vuk asked the jury to put 100% of the blame on Austin Bridge and Road for failing to follow the safety rule of chaining the lifts to the barges in favor of planning the entire job for speed. He argued that the evidence against Austin Bridge and Road was clear and convincing and if they had planned the job for safety, Mr. Suarez would still be alive.

Rosendo, a juror on the case, contacted us a week or so after the trial ended. He wanted to tells us that he thought the family deserved more, saying:

“Mr. Vujasinovic and Ms. Laurenzo,
“I was on the jury for Baylor bridge accident and after the trial I was a little upset with the final verdict so I just left without telling you two the following… You two did a great job, I believe the Suarez family deserved to get more, please let the Suarez family know I fought very hard in deliberations for them.
“Thanks.”

Grateful to have finally received answers, to have finally had the evidence out in the open, and to have had a jury assign responsibility for their loss, the Suarez family is relieved about the verdict. They will never be able to replace Jose, but as they testified on the stand, they never want another person to be killed because Austin Bridge and Road put speed over safety.

One of the alternate jurors contacted us after the verdict was awarded. She said:

“I was an alternate juror on the wrongful death lawsuit for Mr. Jose Suarez. I just learned the verdict. Let me commend the very fine job that Mr. Vujasinovic and his colleagues did during the trial. They professionally handled seven defendants with deep pockets who, I’m sure, were formidable opponents. Mr. Vujasinovic also conveyed the family’s torment and pain very effectively. I commend the law firm for standing by the family until the trial became a reality. Thank you for taking such cases.”