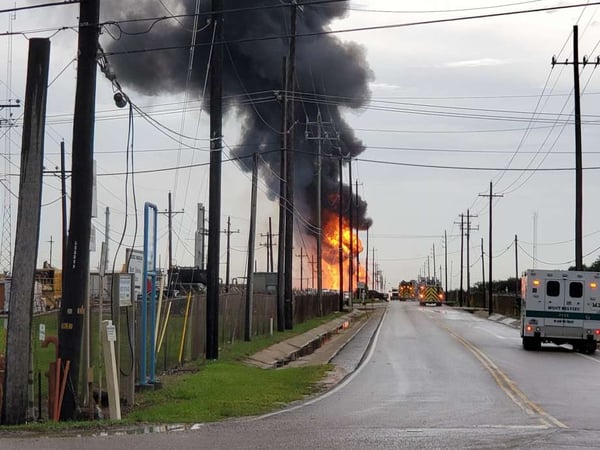 Officials have reported an “industrial incident” at the Lone Star NGL Facility in Mont Belvieu, TX, on Wednesday (July 29th, 2020).

Reports have been made that firefighters contained a fire that erupted after an explosion at the energy transfer facility in East Houston.

The explosion at the Mont Belvieu facility was caused after a contractor struck an underground pipeline that stored natural gas.

The explosion created a fire at the natural gas storage facility which burned through the night. Firefighters fought to contain the flames until late in the evening and ultimately allowed the fire to “burn itself out overnight”, according to local officials.

Lisa Coleman, a spokeswoman with Lone Star NGL, told reporters that there “will be an investigation into the cause of this incident”.

This account of the explosion will be updated as the story unfolds.

Mont Belvieu Industrial Facility Has a History of Negligence

On February 8, 2011, a massive explosion and fire rocked the Southeast Texas community of Mont Belvieu. The explosion occurred at an Enterprise Products petrochemical facility that stores extremely flammable hydrocarbons. Killing one person and injuring dozens more, the incident sparked a massive response from the Texas Railroad Commission and OSHA and the workers and their families.

VB Attorneys was hired by 43 of the Mont Belvieu plant workers who had been injured escaping the explosion. We filed a temporary restraining order against Enterprise the day after it occurred to preserve evidence and ensure the government investigations into the accident were shared with our clients. After investigation, their claims were settled swiftly by our team of attorneys for a confidential amount.

Our team of attorneys helped 43 of the workers recover compensation after they were injured in the aftermath of the explosion at the Mont Belvieu Industrial Facility in 2011. In light of the explosions which have just occurred, it is alarmingly clear that this facility has a history of negligence. Our team of lawyers has decades of experience helping injured workers after explosions.

If you or someone you know was injured fleeing the explosion, you must contact an experienced attorney right away. Click here to receive a free and completely confidential case evaluation or call us at 713-224-7800 today.