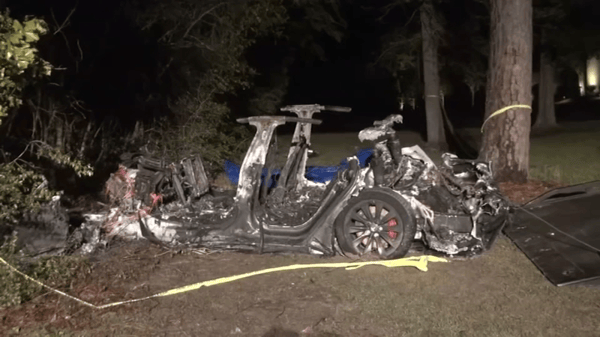 Two men were killed in a fatal car accident involving a driverless Tesla in The Woodlands on Saturday, April 18th. The driverless Tesla caught fire after colliding with a tree, and authorities reported that neither of the two victims were behind the wheel at the time of the accident.

People close to the victims said that the two men were talking about the vehicle’s driverless features before the accident.

The two men were sitting in the passenger seats of a 2019 Model S Tesla, testing out the “autopilot” features, when the driverless car crashed into a tree at a high rate of speed in a Spring cul-de-sac. Authorities responded to the scene, finding one victim in the front passenger seat and another in the back passenger seat.

Constable Herman told reporters that it took over four hours to put out the fire. For reference, firefighters can put out most vehicle fires swiftly in a matter of minutes. Firefighters and first responders used more than 30,000 gallons of water to put out the flaming lithium-ion battery within the car.

Why did the Tesla Model S burn for four hours?

Chief investigator at Harris County’s Fire Marshal’s Office Mitchell Weston noted that while batteries used in electric vehicles are “generally safe,” high impact collisions can lead to “thermal runaways,” which cause an uncontrollable contact between the car’s many different materials and the battery. These thermal runaways can lead to spontaneous fires and battery re-ignition even after the initial fire has been put out.

Below are reasons as to why thermal runaways make fires so challenging to stop:

What causes a lithium-ion battery to overheat and lead to thermal runaway?

The vehicle’s battery likely resulted in a thermal runaway after the vehicle initially caught fire due to the high-impact collision. The most common cause of thermal runaway is high ambient temperatures, and the surrounding flames from the initial combustion likely lead to the disastrous domino effect.

Below are the main causes of thermal runaway:

Houston’s fire marshal’s office and police department are working with federal authorities to investigate the cause of thermal runaway as well as the exact cause of the crash.

Click here to learn what to do you or someone you know has been injured by a self-driving car.