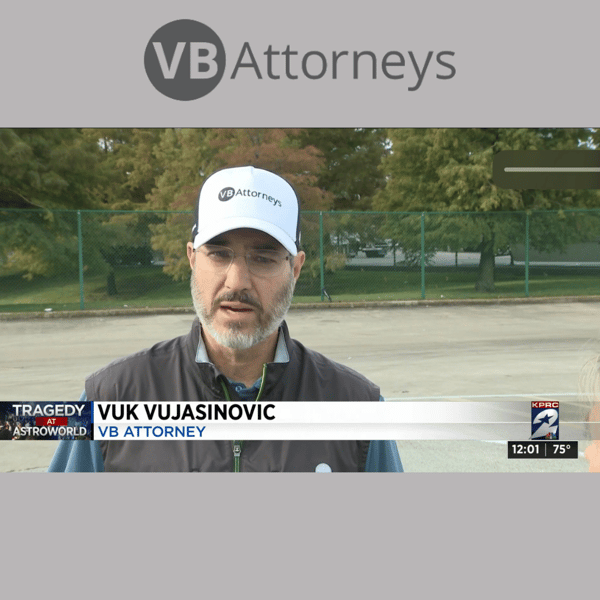 The Astroworld Tragedy: We Fight For Houston

Were you injured at Astroworld Festival 2021?
Hit the button below to schedule time to speak with our attorneys today.

Did you attend Astroworld Festival 2021?
Sharing the footage you captured of the event will help us fight for the victims.

VB Attorneys filed the very first case (see the press release) arising out of the Astroworld tragedy and have secured an agreed restraining order to preserve the evidence on scene.

The Astroworld Festival was launched in 2018, a childhood dream come true for rapper Travis Scott. After the COVID-19 pandemic forced the cancellation of the 2020 festival, 2021 was supposed to be a return to normal, expanded to two nights with a series of events known as "Astroweek" leading into the festival.

With 50,000 people in attendance at NRG Park, the sold-out Astroworld Festival kicked off on November 5, 2021. By 9 p.m. Friday night, the festive atmosphere turned to a scene of pure chaos, resulting in the deaths of eight people and dozens injured.

The investigation is ongoing, but the known facts remain. The Friday night crowd was packed in so tightly that audience members were pushed to the front. The crowd surge pushed towards the front of the stage where scores of people were compressed. Many concert-goers report a feeling of being underwater and not being able to breathe. The 2019 Astroworld Festival saw a similar incident with three people trampled and hospitalized. Additional security measures were put in place, but Friday's tragedy is a stark reminder that it was not enough.

The Astroworld Tragedy - Our Thoughts

VB Attorneys has filed the very first case arising out of the Astroworld tragedy. We have taken a two-pronged approach against Live Nation Entertainment and NRG Park. We have petitioned Harris County District Court to issue a restraining order that prohibits Live Nation from “damaging, modifying, altering, selling or disposing of any evidence of negligence at NRG Park during the Astroworld Fest 2021 on the night of Nov. 5 and the morning of Nov. 6, 2021.” Additionally, VB Attorneys is seeking a jury trial, alleging that Live Nation and the other defendants failed “to control and supervise the crowd at the event,” “to provide sufficient equipment for medical professionals,” and “to prevent a stampede from occurring,” among other things.

Our court appearance has resulted in an agreed restraining order which will preserve evidence for a short period of time. VB Attorneys and our experts will be on scene to do our work so we can fight for you.

We moved fast because right now, the billion-dollar insurance companies and their armies of lawyers and adjusters are on the case, trying to protect their money at the expense of the innocent victims.

We intend to ensure that the insurance companies lose, and lose big, and that this kind of tragedy never happens again.

Wonder why we filed this case so quickly? This video explains what we are doing to protect you.

What To Do Next

Knowing what to do next is not always clear when a catastrophe occurs. Those that have been injured do not know what to do - they have not been through this type of situation before. You are worried about your family, medical costs, and what this means for your future.

On the other side, insurance companies and other professionals are trained in evidence collection and spend millions of dollars to protect themselves, often at the cost of your health and financial future.

If you or someone you know was hurt or killed during the Astroworld tragedy, you need to decide who to trust. Find representation that has had experience in this type of situation and will put your needs first. This is not a level playing field, but the competent lawyers at VB Attorneys can get you back on even footing.

The next steps taken are critical, we explain why.

Our Request for Evidence

We have filed one of the first cases in the Astroworld tragedy. There were thousands of people taking photos, and recording audio and video. We are asking the public at large - if you have any evidence that you think might be helpful, please send it to us.

It is vital that the general public comes together and preserves the evidence to protect those hurt or killed. Live Nation and Travis Scott have a history of Entertainers and corporations need to be held responsible for their actions

In Houston and in Texas, we protect our own.

We've put together a video on how you can help.

Through this case and the others that VB Attorneys are filing, we are preserving evidence that will be necessary to the victims. We are holding accountable everyone who is responsible for this terrible tragedy.

If you have photos, video, or audio that will assist us in ensuring this never happens again, please submit here.

VB Attorneys In the News