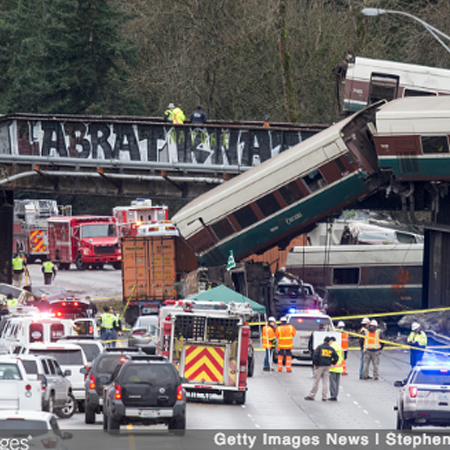 An Amtrak train carrying 78 passengers and 5 crew members derailed before 8:00 a.m. on Monday, December 18, 2017. The derailment occurred 40 miles south of Seattle, Washington, in Pierce County. Officials report this was the first time the train traveled this route, which was created to speed up passenger train travel in Washington State.Multiple people were killed and 77 people were transported to area hospitals. The National Transportation Safety Board dispatched a 20 person team from Washington D.C. to investigate the derailment, calling it a “major incident.” The NTSB team is investigating three things:

While this investigation is underway, some facts are already known to the public. Mary Schiavo, a former Inspector General for the Department of Transportation, told CNN that “Local officials in Washington were highly critical of sending a train at this speed through this area because it had to at some point reroute to an intercity line and they specifically warned that it needs to slow down at the curves in the track.” She went on to say the tracks had been modified and tested in the beginning of December of 2017.

Questions about cause of Washington State Amtrak derailment

A website that tracks train speeds recorded a speed of 81.1 mph just before the Amtrak train derailed. On Tuesday, December 19, 2017, the NTSB reported that the train was traveling at 80 mph, which was 50 miles above the speed limit for that area.We know the train was supposed to be traveling at 30 miles per hour, and that this was the first time the train had traveled this new, faster route. An audio recording of a train official speaking with emergency personnel immediately after the derailment is available to the public as well. The train operator said, “we were coming around the corner to take the bridge… and we went on the ground.” The audio recording makes it seem as if the accident occurred quickly. Which is why we’re asking why the train was traveling above the speed limit.

Other initial questions about the cause of the accident include:

Why victims and families need to launch an independent investigation immediately

Victims and their loved ones will have additional questions about this derailment, which are best answered by launching an independent investigation. The government’s investigation may not be complete by the time the deadline to file a lawsuit passes, and Amtrak’s investigation is only going to help the company avoid being held accountable. Because of these impediments to justice, train accident victims should contact an experienced personal injury attorney to have them launch an independent investigation as soon as possible. Train accident victims deserve to know why the accident occurred. Train accident victims also deserve to hold the responsible parties accountable for the injuries and losses they have suffered. An independent investigation is the first step in holding the responsible parties accountable. Our track record of holding some of the largest corporations in the world accountable after major incidents or disasters includes successfully investigating these companies.Our initial investigations begin with filing a Temporary Restraining Order (TRO) against the companies involved to prevent any evidence from being touched, moved, tampered with, damaged, or destroyed. The TRO gives us the time we need to work with experts to conduct a thorough, independent investigation. We are able to obtain the results of our investigation much more quickly than the government. We then get to work in court  by filing a lawsuit against the responsible parties. Whether that means a jury trial or a settlement – or forcing the company to operate more safely to prevent future injuries – we work to get you the compensation you deserve for your injuries in the shortest amount of time.To find out more about how we help accident and disaster victims and their loved ones, contact us at 877-724-7800 or fill out our contact form. Our Board Certified attorneys will review your case for you and help you determine what your next steps should be.