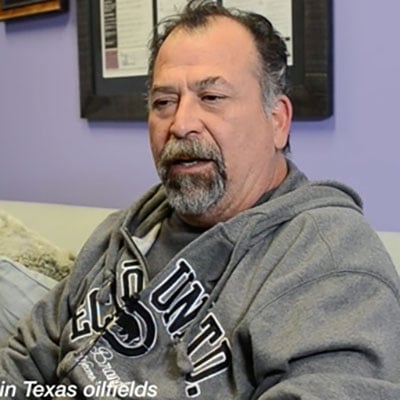 "I highly recommend them to anybody."

After being struck by high-pressure water and cement in the back of his head and neck at a rig site in South Texas, Ricardo's life turned upside down. A career commercial truck driver, Ricardo enjoyed his career and driving for an oilfield service company. One day, he was at a rig site, pumping mud out of a pit when another oilfield service truck pulled up next to him. The workers from the other company were supposed to clean their truck, and after filling it with gallons and gallons of water, turned the wrong valve in their attempt to empty the truck. The water and debris shot out, hitting Ricardo. He was taken to the ER, where he was diagnosed with a concussion and a neck sprain.

Ricardo treated under workers comp for three months, and kept complaining of a sore throat and a stiff neck. It turned out to be esophogeal cancer, and workers comp closed his claim. He thought his troubles would end when he hired a law firm out of San Antonio to help him fight his workers comp issues. They didn't. After thirteen months of no progress, Ricardo decided he needed to find another firm that would actually work on his case. He found our firm after researching cases similar to his online. He talked to Vuk, and hired Curtis to pursue a third party cases against the oilfield services company that employeed the three men responsible for his injuries.

Thankful for finally obtaining a settlement in his case, Ricardo sat down in January 2015 after we mediated his case and came to a satisfactory settlement agreement, to talk about his experience working with our firm. He says, "I highly recommend them to anybody."