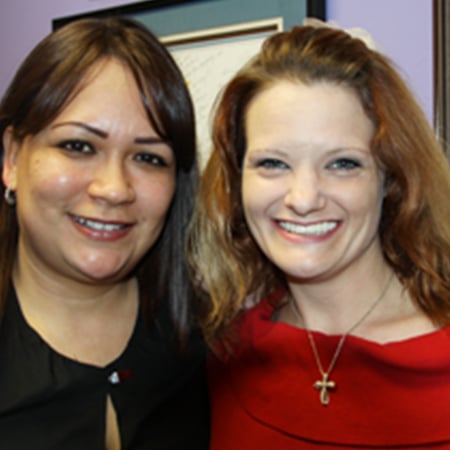 "This firm cared about me when few others did."

Amy was working as a mortgage underwriter when she slipped on a wet floor at her office and broke her arm in 2012. A single mom of three kids, she worked hard to provide for her family and this was not the kind of break for which she was hoping. She'd broken her right distal radius and ulna, suffered from post-traumatic peritendonitis, and strained her scaphoulnate ligament. Right handed, she was unable to work until it healed.

But more complications ensued and she needed carpal tunnel surgery on her wrist. Initially, she seemed to have recovered but by June 2013, her wrist was swollen and hurting again. She had another surgery. That surgery did not help either. So in September 2014, two years after the initial break, she underwent a total wrist fusion.

She'd been unable to provide for her family for almost two years, she wasn't able to use her dominant wrist for most of that time, and the pain and constant bad news had depressed her. It seemed that no matter what she did, how hard she tried, nothing worked. She would never regain full use of her wrist.

Amy hired our firm in 2013 before her second surgery. She had an open claim through workers' compensation, but she was facing months of lost income and an uncertain future. Curtis took her case and pursued a third party case against the janitorial company, settling her case after mediation in January of 2015.

After her case was over, Amy wrote a note about her experience working with us:

"Outstanding group of people! This firm cared about me when few others did. They fought for me and after settling I have been able to move on with my life no longer afraid of where my next meal will come from or how I will pay my bills. This more than just a job to them. They truly care. Thank you, from the bottom of my heart for standing up for me."