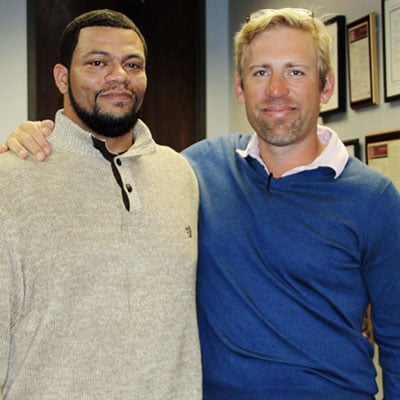 After we helped Keidron obtain a settlement in his Jones Act case against ENSCO Offshore, he sat down and talked about his experience hiring us for his case. He says:

"I grew up in a little town called Ville Platte, Louisiana. I found out about the oil industry because there's a lot of people from Ville Platte that work out there, especially my friends, uncles, and dads. I started off on a paint crew, and that's the lowest crew. And they seen my work performance and I moved up to a roustabout and then I was on my way to being a derrickhand.

"I said right about noon, right about lunchtime, I felt a pop, I knew something wasn't right. I felt a pop in my back. And I laid down, woke up at ten that night and it was worse. And at ten o'clock I told a supervisor about it, a driller, and a toolpusher. And they told me to go see the medic the next morning at six o'clock when we got off. And they just gave me a heating pad and some Tylenol or Ibuprofen. So I just stuck it out for that whole week, but it was pain I had to deal with for a whole week.

"I thought it was a pulled muscle at the time, but come to find out it was a messed up disc, so you could imagine the pain working like that for a whole week."

Keidron wound up needing surgery to correct the damage to his spine, and can no longer work offshore. Brian took on Keidron's case after the maritime claims adjuster made Keidron and his wife suspicious about the company's intentions. Brian was able to settle Keidron's case within 9 months.

Keidron went on to say, "There's no words that I can say to express how I really feel about him for what he did for me and my family. You know, there's really no words, there's nothing I can put into words to really tell how much he did for us. All I can really do is pray for him. Pray that he stays the person he is and never changes, because he's a wonderful guy, truthfully."