What do you see? 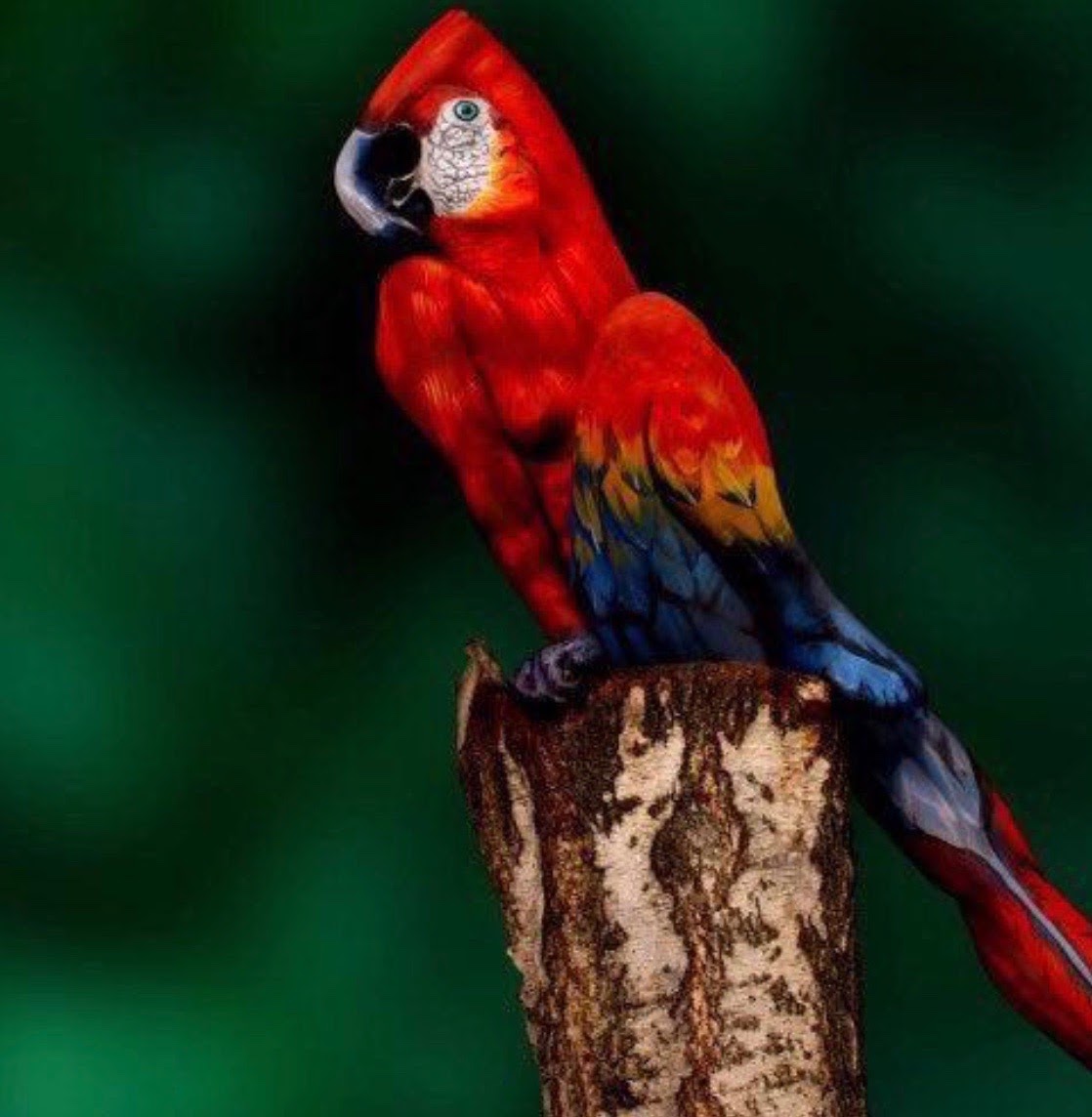 You see a parrot, right? That’s what I saw too.

Until someone told me that this was actually a photo of a woman in body paint. And even when I learned what the photo actually shows, I couldn’t see the woman.

Do you see her? Even when I knew this photo showed a woman, I still didn’t see her. I had to stare at the picture for a few minutes before my eyes could actually see what was really shown in this photo.

Our cognitive biases are at work with pictures and with every interaction we have. Our brains interpret the world in a way that isn’t entirely accurate. They cloud our vision of reality.

In the photo example above, our brains create an image of a parrot, because that’s easy. Our brains use a massive amount of energy, and we have evolved to conserve energy and use it only when we need it. So our brain takes shortcuts all the time.

These shortcuts often lead us astray. For example, there is a cognitive bias called “tribalsm” which means you favor people in your “tribe” and treat others who aren’t in your “tribe” as the enemy.

American politics is a terrific example of cognitive biases at work. If you support Trump, then you think those who can’t stand him are evil people, even if you’ve never met them before or have any idea what they actually believe. If you don’t support Trump, then you think people who support him are evil. We think this because our brains are designed to think this way. And it is completely and totally irrational.

We live in the most interesting prosperous time in human history and also the toughest of times. We are materially rich and spiritually poor.

Does it seem like everyone is always bickering at each other? Sure does to me. If you get all your news from social media, you’d think everyone was at war with each other. You’d think people you know and love in real life are actually insane maniacs.

Is this how we want to live?

The truth is that we are caught up in our cognitive biases, and most of us don’t even know it. We are in a prison and the walls are invisible to us.

Our brains spend a good part of the time creating fictional narratives and stories that bear little relation to reality. And the Big Tech companies and political parties know this and feed these narratives to make billions of dollars or elect their preferred candidate, who will then take money from the same people who elected them, in a cycle that endlessly repeats.

Unless we figure a way out of this invisible prison.

To escape, we must know the truth. And the truth is that every human being who ever lived has a brain that contains cognitive bias. It’s hardwired into us. There’s nothing you can do to eliminate your biases. Nothing.

The election of 2020 will be the best case study in human history on cognitive biases. If you change your perspective just a little bit, and step out of your tribe for just a bit, you can see exactly what I am talking about every time you get on Facebook, Twitter, or any other social media site.

You can see it in the news, in the photographs of people yelling at each other, at football games and other sports events, when you see people yelling “Lock Her Up” or “Yes We Can!” or anything else that would look insane to a normal person but looks normal when we are in our tribal state.

It’s everywhere. It’s the glitch in The Matrix.

Once you see how people’s minds really work, when you see clearly, you cannot unsee it.

Most important, when we realize we are biased and fallible human beings with brains that don’t always serve us in the best way, we realize that most of us have pretty much the same worries, fears, goals, and purposes. We all want the same things, really.

We are in this together. All of us. Once we start to wake up from this cognitive slumber, we will see just how important it is that we work together, that we treat each other with kindness, and that we recognize that love and compassion and forgiveness are far more powerful ways of approaching life than anger and hate and vengefulness.

I’m excited about the future. I see a mass awakening happening now. Right in front of us.

And it’s about time.