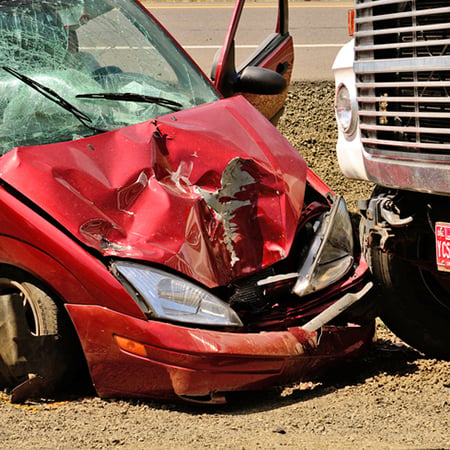 On Oct. 11, 2004, plaintiffs Ivette N. Vasquez, 27, a dental assistant, was driving a compact car with Guadalupe Carmona, 53, as passenger on Gessner Drive in Houston. Vasquez was in the outside southbound lane when an 18-wheeler going east on the service road of Katy Fwy. struck her car. The right front quarter of the tractor-trailer struck the front of Vasquez’ car.

Claiming injuries, the plaintiffs sued the truck driver for negligence, claiming he ran a red light, and sued his employer, a moving company, under respondeat superior. The fact that Vasquez was acting in the course and scope of his employment was undisputed.

According to the plaintiffs’ attorney, the defense contended that the light was yellow and that Vasquez failed to take proper evasive action.

Vasquez injured her lower back; she claimed a herniated disc at L5-S1. She underwent physical therapy and steroid injections, and on Nov. 28, 2005, she underwent a laminectomy and discectomy. Her medical bills totaled $38,021. She claimed past lost wages of about $35,000, saying the back pain affected her ability to work as a dental assistant, as well as her activities of daily living.

Carmona sustained soft-tissue injuries to her lower back and left shoulder. Her condition improved with physical therapy. Her medical bills were $12,349, including diagnostic testing. She claimed no lost wages but sought damages for pain and suffering, claiming that pain inhibited her in many activities of daily living.