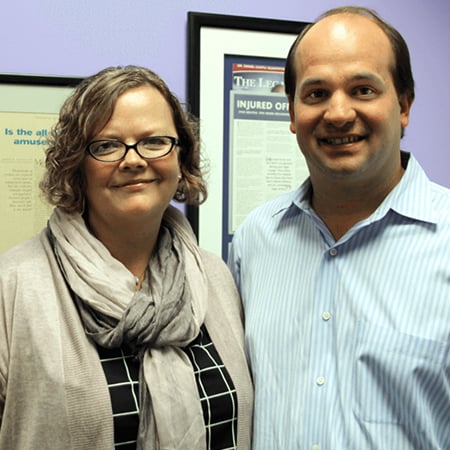 Boxed into a corner

Originally from Scotland, Julie and her family came to Houston in 1999 when her husband’s company transferred them. She settled into life in Texas pretty quickly and came to enjoy all the shopping opportunities Houston has to offer. She really loved shopping at a major retailer, and in 2006, when her daughters were teenagers, she got a job working at that store. She was over the moon about her new job in the stockroom. She loved her job and her coworkers and became an invaluable employee for the five years she worked there. Her coworkers respected her work ethic and her experience.

Unfortunately for Julie, the store at which she worked was so focused on sales that the employees received little to no training. Employees got hurt all the time working at that store.

Her job required her to work with heavy carts to move boxes of merchandise around the stockroom and the store. These carts, called “U-Boats.” have heavy shelves that can be removed and adjusted. One day in February of 2010, Julie was working with boxes of back-stock that needed to be moved. To move them, she needed to remove one of the heavy wire shelves on a U-Boat so the boxes would fit. While removing one side of the shelf, the weight of the shelf caused Julie’s wrist to twist with her fingers stuck in the shelf’s metal wiring, re-injuring her wrist. She reported the injury to her manager and went back to work, finishing her shift. The pain only got worse, so she went to the doctor after her shift was over, worried that it was a serious injury.

Her suspicions were confirmed. A year before she’d sprained her left wrist trying to prevent a box from falling on her coworker and had been wearing a brace while at work. This time, she’d hurt her wrist while wearing the brace. The doctor told her she’d torn cartilage in her wrist. He recommended she start with physical therapy and injections, but her wrist didn’t get any better. A month and a half later, her doctor recommended that they operate on her wrist. Julie underwent surgery. Her doctor corrected the cartilage issue and put in a plate to fix one of the bones in her wrist.

Through all of this, Julie kept working. After the surgery, she worked in a light duty capacity as the store auditor. However, her wrist still hurt so much, she really couldn’t use it. Her coworkers noticed how she was basically doing her job one-handed, even though it was a “light duty” job it required heavy lifting. Her manager had been telling her for a year to hire an attorney, so she finally did.

Julie wanted her manager to hear the news from her, not from idle gossip among her coworkers. That was a mistake – after hearing the news, he immediately sent an email to her coworkers saying she would be terminated because she was filing a lawsuit against the company and promoted a coworker to Julie’s job. Her manager’s reaction shocked Julie. She felt betrayed.

In December of 2011, she contacted VB Attorneys and hired Curtis Bickers to pursue a work injury lawsuit for her. Curtis recommended she get another opinion on her wrist and he filed a non-subscriber lawsuit against the company. The lawsuit claimed that retailer was negligent in failing to provide a safe place to work and that the company was negligent and reckless in failing to properly coordinate and provide Julie with proper medical care.

As of 2014, Julie had been seeing the doctor Curtis recommended for a few years. Her lawsuit was ongoing and set to be mediated later in the year. Because her wrist had never gotten better and she was in constant pain, the doctor had recommended limiting her activities to avoid making the pain any worse. He also recommended that she have another surgery to remove the plate in her wrist.

At mediation, the major retailer’s top and final offer that day was $35,000. To build up Julie’s case further, Curtis took the deposition of the doctor who recommended Julie limit her daily activity and have the plate removed. The retailer had been arguing that her wrist issues were due to a preexisting injury, but the doctor’s deposition proved that her injuries were new and needed further medical attention and possibly even surgery.

Curtis also took the depositions of some of Julie’s coworkers. They talked about how the injury had negatively impacted Julie’s life to the point where she couldn’t use her left arm at all. The coworkers also testified that the retailer had not trained anyone on how to properly remove the U-Boat shelves. The retailer agreed to go to arbitration after these depositions were taken. The case was arbitrated in early November 2014 and it settled for a confidential amount more than three times what the retailer had originally offered.