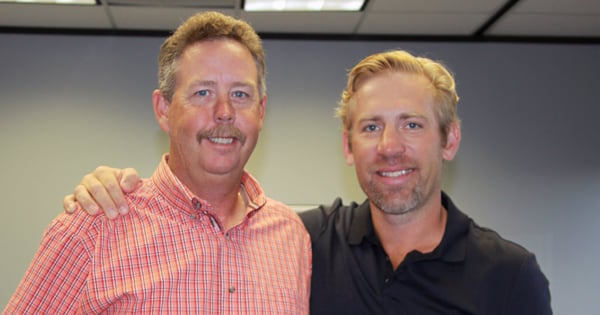 “I couldn’t remember if I kissed my wife goodbye, but I had to help my buddies.”

Months after an oil well blew out, killing two men and injuring two others, Don kept reliving the blowout. The four crewmen weren’t just roughnecks on the job, they had been Don’s friends for years.

Having worked in the oil and gas industry for most of his life, he has thirty years of experience as a “fisherman” under his belt. As a senior oilfield specialist, his job as a fisherman was to fix problems down in wells, and the name comes from the fact that they often have to fish items out of the wells. Don is an expert at recognizing potentially dangerous pressure problems and solving downhole problems in oil and gas wells. The day before the blowout, he’d been called by the company man for that well about a potential pressure problem and had agreed to come find the issue and help correct it.

The day of the blowout, in addition to being a professional problem-solver, he added hero to his resumé.

Anadarko had hired Basic Energy to cap a natural gas well it had drilled in West Texas. The wellhead they were using had been purchased from Cameron International. Don was working for Weatherford as a consultant for Anadarko on several wells in the area to help if anything went wrong with a well. On April 4, 2013, Anadarko’s company man called Don saying that the Basic crew was having problems with the casing on a well they were trying to cap and thought something might be stuck down there. After requesting that the company man investigate the issue, he agreed to meet everyone at the well the next morning.

The company man and the Basic crew had tried to pump water down the well to balance out the pressure so they could put the blowout preventer on it and cap it for production, but instead of the many hundreds of barrels they needed to pump into the casing, they were only able to pump in three barrels of water. That was when the company man called Don. After speaking with him to find out if anything was downhole that shouldn’t be, he went through the drilling logs and specs to see if anyone could have accidentally left something downhole. He could find nothing in them to indicate there might be anything downhole, but he thought they might not be accurate. In his experience, the records change hands so frequently in the drilling process, rods and packers could be left in the well but not logged in the records.

Although he had no experience or training in how to handle this type of pressure situation, the company man told the crew to shut down the well and to come back in the morning. If the well still read that there wasn’t any pressure in the casing unit, to remove the drilling tree, feel around for anything that might be in the well, and if they couldn’t find anything, to install the blowout preventer.

On the morning of the 5th, the crew arrived at the well around 7 in the morning. They checked the tubing and pressure level, which still read at zero. To be able to do the next step of shutting down and inspecting the well, they had to disconnect the tubing. They went about the job of opening all the valves to remove the Christmas tree so they could attach the blowout preventer. Going by the book, they followed all the steps they were supposed to take if a well was reading at zero pressure. What they didn’t know was that this well still had a valve release plug (otherwise known as a VR plug) in it, a plug that is a hidden source of pressure in these types of wellheads. They had no idea that the well was pressurized when they went to remove the wellhead.

At about this time, Don pulled up to the rig in his truck. The crew waved at him, and turned back to keep working. As Don put on his hard hat and went to get out of his truck, the well blew out. Everyone flew through the air. The force from the blast was so intense, it blew the clothes off the crew. All Don knew was that he had to help them and make sure they would be out of the way in case the natural gas spewing from the well caught fire. He immediately ran to the well, as close as he could get, and evaluated the situation. He called Anadarko and told them to get help out to the well right away, then ran back and drug the crew as far from the well as he could.

One person had been blown into the rigging and one was lying next to the wellhead. He drug them back. One derrick hand had died in the explosion and another person had been blown 100 feet away. While Don was pulling the crew’s foreman from the well, he hurt his neck. The man who had been blown 100 feet away ran up and helped him get the foreman a safe distance away from the rig. Everyone was in a great deal of pain. It was a chilly morning, and he tried to keep everyone warm. The company man arrived after the blowout, told the guy in the water truck to kill the well, and helped Don keep everyone warm and calm until the ambulances arrived. One of the three surviving crewmembers died in the helicopter on the way to the hospital, the remaining two crewmembers survived, and will bear the physical and mental scars of the blowout for the rest of their lives.

Picking up the pieces, reliving the past

The surviving crewmembers and the families of the deceased crewmembers filed a lawsuit against Anadarko, Basic Energy, Cameron International, Cudd Pumping, and EPI Consultants. In their lawsuit, they argued that the well blowout was caused by many failures of the defendants to provide a safe work environment and a competent company man on the rig site. Anadarko’s company man had worked his way up from derrick hand to a workover and production operator before being hired by Cudd and EPI as a consultant. He had no training or experience handling downhole problems. He hadn’t even heard of a VR plug, nor had he ever seen one. Don testified as a witness in their lawsuit. He then hired our firm to pursue his own lawsuit against the defendants. We did so, filing in Harris County in May 2014, arguing the defendants were negligent in multiple ways, including:

The force of the  blowout resulted in Don sustaining permanent hearing loss and ringing in his ears that is only partially alleviated by wearing hearing aids. He developed pneumonia and permanent scarring in his lungs from breathing in the natural gas without any protective gear. The neck injury he suffered pulling the crew to safety required him to have surgery to have an artificial disc placed in his neck to alleviate his chronic pain. In addition to the physical injuries Don suffered from the explosion, he was diagnosed with depression and PTSD. He lives every day wondering if he could have done anything more to save the crew, to save his friends. He has nightmares, relives the blast – seeing the men getting blown away and the negative pressure from the well trying to suck him in like a vacuum.

His hearing loss, chronic pain, depression, and PTSD prevent him from returning to his role as a fisherman for Weatherford. Mourning the loss of his friends and constantly reliving the blowout, wondering if he’d run to the foreman first, if the foreman would have survived, Don is recovering from a highly traumatic experience. We worked up his oilfield injury lawsuit, obtaining expert reports about his physical and mental injuries, expert reports about his economic losses, and expert reports about the cause of the blowout. The expert hired to review the events leading up to and surrounding the blowout determined that there was no operator error on the part of Anadarko or Basic since the VR plug was supposed to have been removed from the rig at the Cameron shop by Cameron’s technicians before the rig was sent out to the drilling site. Nobody knew it was there or that it was the source of the pressure issue.

The cost of doing the right thing

We mediated Don’s case in October 2014. At that mediation, Weatherford declared the other defendants were blameless in Don’s case. That they were taking full responsibility for what happened to Don. With Weatherford as the only defendant, we had experts draw up a life-care plan for Don, outlining his losses, his medical prognosis, his future medical expenses, his psychiatric prognosis, and his potential for returning to work as a fisherman. We presented that information to Weatherford and at a second mediation in April 2015, Weatherford agreed to settle Don’s case for a satisfactory amount.

Money will never fix what Don went through trying to save his friends’ lives. Although his actions were heroic, he spends his days and nights thinking about the accident and if he could have possibly done anything differently that would have prevented his friends from dying. Don has a great deal in common with veterans who survived attacks only to discover their friends did not survive. There is no scenario where Don wouldn’t have tried to help his friends when the well blew. Don told his psychologist, “Sometimes doing the right thing sucks, but not doing the right thing is worse.”

For Don and the surviving crewmembers, their lives will forever be changed. They will always live with what happened at that rig in April 2013. While we can’t take away his grief and pain, we hope we can alleviate some of the financial burden that has been placed on Don and his family as a result of the blowout.