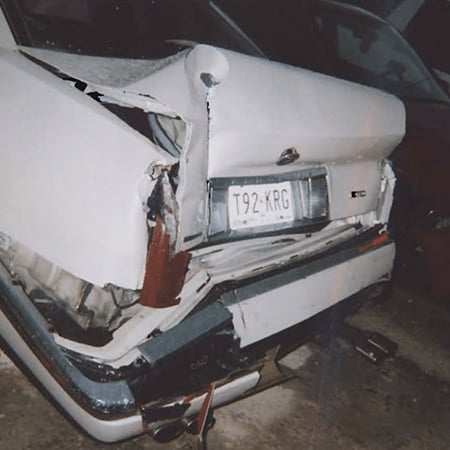 On May 5, 2005, plaintiff June Smith, 33, a bank teller, was driving on F.M. 1960 East in Houston. She slowed for traffic and was rear-ended by Thomas Haberle. The impact pushed Smith’s 1994 Cadillac Eldorado into the vehicle ahead of her. Haberle was in a 2005 Ford F-250 pickup. Haberle was charged with DWI after taking a field sobriety test. The charge was later dismissed.

Smith went by ambulance to an emergency room, where she was diagnosed with a concussion and neck and back sprains. She was released after two hours. Two weeks later, Smith sought follow-up care and was prescribed physical therapy for her neck pain and medication for her headaches. MRIs were negative. No further future care was recommended by her doctors.

Claiming injury, Smith worked with Attorney Brian Beckcom and VB Attorneys to sue Haberle for rear-ending her while intoxicated. The results of the field sobriety test came into evidence, as did the officer’s conclusion that Haberle was drunk at the time. The investigating officer’s testimony and report also supported Smith’s claim that Haberle was at fault for rear-ending her.

Haberle denied that he was drunk. The investigating officer, in his deposition, said he could not conclude from the field sobriety test that Haberle was drunk because Haberle was 65 at the time and had a history of diabetes, Bell’s palsy, and a crushed right ankle. Haberle also contended that he was rear-ended first, by a phantom vehicle driver, which he designated as a responsible third party. The defendant claimed that it was a hit-and-run accident, and the “phantom driver” left the scene. Smith denied that Haberle was rear-ended at all. There was no visible damage to the back of his vehicle.

Smith’s past medical bills were $13,380. The amount paid or incurred was a little more than $9,000. The court ruled that all the bills were admissible, but that, if the jury awarded more than the amount paid or incurred, the court would reduce the verdict accordingly. The defense objected to all the medical bills, saying that the affidavits were defective, but the court allowed them.

Smith missed five days of work, but the court dismissed her lost wage claim before trial. She also claimed unspecified past pain and suffering and past physical impairment, saying she could not sit for extended periods of time or lift.

Smith had denied any prior accidents, but she had a car wreck in 1999 with documented headaches, neck pain and back pain.

The jury found only Haberle negligent. The jurors told the plaintiff’s attorney afterward that they deliberated mostly on how to calculate the intangible damages. Smith was ultimately awarded:

The total verdict was $27,038.00. After reduction of the medical expenses award, Smith’s recovery will be a little more than $23,000. Attorney fees amounted to $10,815, and litigation expenses added up to $6,000. After the trial, the defense was considering filing a motion for new trial.