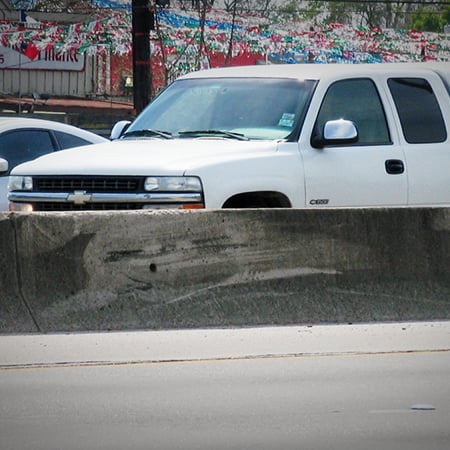 On a clear, August morning, an unlicensed an inexperienced driver felt her tire go flat and lose its tread while she was traveling in a middle lane of Houston’s Inner Loop. She was unable to get her car over to the shoulder of the freeway. She was stuck. Behind her were the hundreds of commuters on their way to work during the morning rush hour. Her disabled car created a massive logjam of vehicles on the freeway.

Kevin, a 53-year-old self-employed insurance salesman, was traveling in the far left lane of the highway, hoping to squeeze through the logjam. What he didn’t know was that an 18-wheeler with an empty trailer was barreling down the highway, unaware of the car with a flat tire stuck in the middle of the freeway. Once the truck driver realized the extent of the logjam in front of him, he slammed on his brakes. It was too late for him to stop with any modicum of control over his vehicle. The truck fishtailed, causing the trailer to swing out and smash into Kevin’s Ford Explorer and several other vehicles. The force of the impact caused the Explorer to ricochet into the concrete barrier dividing the highway.

The police ticketed the inexperienced driver for driving without a license and for contributing to the accident by failing to pull over to the shoulder of the highway when her vehicle became disabled. The officer at the scene also charged the truck driver for unsafely changing lanes.

Injuries from accident worsened over time

When the EMTs arrived on the scene, they transported Kevin to the hospital. His back and right leg were hurting him. He was diagnosed at Memorial Hermann with neck and back pain. He was told to follow up with his primary care physician if he was still in pain. Not only was he still in pain, but the pain had worsened and spread. He went to his doctor the following week, complaining of head, neck, back, and left shoulder pain all caused by the accident. The doctor recommended physical therapy.

After weeks of physical therapy, Kevin’s pain didn’t diminish. He was also losing range of motion in his left arm and in his back – to the point that he couldn’t use his left arm very well. As a left-handed person, this issue was putting a burden on his life and on his livelihood. Further testing revealed a rotator cuff tear that would worsen over time. Surgery was recommended. A year after the surgery, Kevin’s shoulder was still painful, and his doctors said his recovery was guarded – they did not think he would ever be pain-free or have full range of motion in his left arm again.

During this time, Kevin had hired VB Attorneys. Vuk Vujasinovic took the lead on the case. One of the other drivers in the accident had already filed a lawsuit against the truck driver’s company, W.W. Rowland, and its insurance company. The attorneys representing the other driver had already taken the depositions of the truck driver and of the unlicensed driver whose car had become disabled on the freeway.

The truck driver had admitted in his deposition that, because he was paid per trip, the more trips he took in a day, the more money he made. He had the incentive to make as many trips as he could, to the detriment of his own safety. If he was driving more than maximum number of hours in a day set in federal safety laws, he would be endangering himself and the other drivers on the road due to fatigue, loss of concentration, and other effects of logging too many hours. The truck driver also admitted in his deposition that he had been driving too close to the truck in front of him to see the disabled car in time to stop safely.

What Vuk needed for his investigation, in addition to the depositions of the two drivers, was to get the truck driver’s records. He needed to find out how long the truck driver had been on duty in the months before the accident and to find out if the driver had been given any other citations or been involved in any other accidents. Crucial information to determining how much fault should be placed on the truck driver in the accident. However, the trucking company had lost their copy of the driver’s logs. Vuk had taken the deposition of W.W. Rowland’s Director of Safety and Security, who admitted that the company had a duty to preserve the driving logs under federal safety rules, but had “lost” them anyway. The truck driver, who was supposed to keep a copy of his driving logs as well, had misplaced or “lost” his driving logs in the months after the accident as well.

As fishy as the coincidence was that the driver and the trucking company had lost the driving logs, it actually helped Kevin’s claim that the truck driver could have avoided the accident and could have maintained control of the 18-wheeler if he hadn’t been driving recklessly. Vuk would be able to take that evidence to the jury if the case went to trial and ask the jury to assume that the missing evidence be viewed as unfavorable for the defendants. Even though he couldn’t use the driving logs to bolster his case, the fact that they were missing helped Vuk cast suspicion on the trucking company for being negligent.