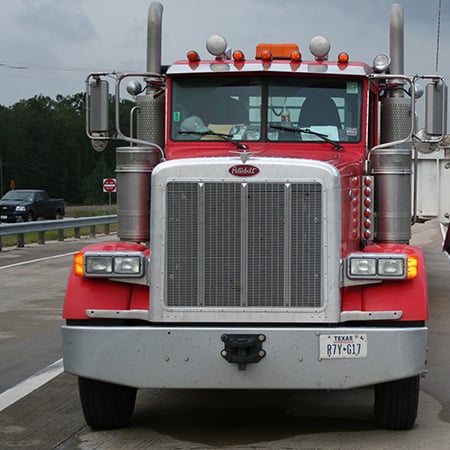 “Thank you for helping us through the hardest time in our lives.”

It started like any other day. Sonya was driving on Highway 59 with her two-year-old son and four-year-old daughter. Sonya noticed a problem with one of the tires on the family truck, so she pulled off onto the shoulder of the highway.

Little did Sonya and Justin know what was about to happen: something that would change their lives forever.

That morning, a convicted felon was about to get behind the wheel of a massive 18-wheeler (in fact, the vehicle had 34 wheels). The driver’s truck was loaded to the point of overflowing with oilfield equipment. The driver, who had spent time in prison before being hired by the trucking company, was a known drug abuser. In fact, he had cocaine in his system that morning.

The driver recognized that the truck was overloaded beyond its legal permit and noticed that parts of the oilfield equipment were hanging so far off the trailer that the truck would take up multiple lanes of traffic and was beyond its permitted capacity. The truck pusher for the trucking company called the company’s executives to explain the situation to them and get instructions on what to do next.

Rather than stop the job and fix the load, management told the supervisor to “run it anyway.”

So a convoy of trucks started from near Victoria, Texas, and began making its way north on Highway 59, toward Sonya and her children.

What happened next was as unsurprising as it was tragic. The driver, in a convoy of trucks, passed Sonya’s disabled vehicle. Because his truck was overloaded beyond the legal permit, the oilfield equipment was hanging so far off the right side of the trailer that it smashed into Sonya’s truck and drug Sonya and her children almost two football fields down the highway.

Sonya and her daughter were badly injured. Sonya and Justin’s two-year-old son died at the scene of the accident.

Not long after the horrifically tragic accident, Sonya and Justin hired Brian Beckcom and Vuk Vujasinovic of VB Attorneys to investigate the accident and lead a legal team in a lawsuit against the trucking company and its insurance company.

Brian and Vuk sprung into action immediately, hiring professional engineers to preserve the evidence at the scene of the accident and to inspect the driver’s truck. As part of their investigation, Brian and Vuk also:

Brian and Vuk worked on the case together, combining their strengths in order to do battle with the billion-dollar insurance company and its experienced defense lawyers.

Vuk took the depositions of the trucking company’s executives. Those depositions established that the trucking company violated its own rules and regulations by hiring the driver in the first place, failing to properly train him once they hired him, and failing to monitor him for hard drug use even though they knew that the driver had a history of abusing hard drugs. The executives’ depositions also revealed that they knew the driver’s truck was beyond its legal, permitted capacity and told the driver to drive the truck anyway.

The terms of the settlement are confidential. Although nothing will ever replace Hunter, Sonya and Justin have been able to make good use of the settlement by providing for their family and by helping with local charities.