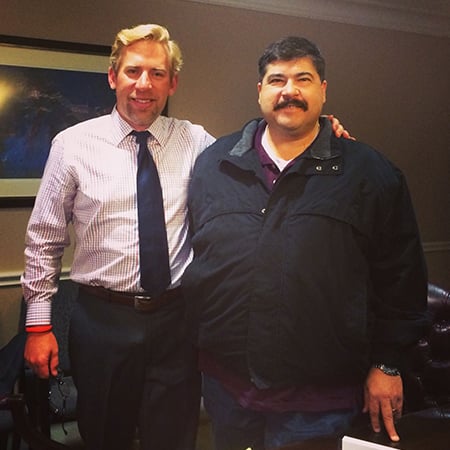 In August of 2012, Steve was driving his car down a fairly busy street when a truck came out of a private driveway and collided with his car. Steve’s car was hit with such force that it was flipped over causing him to suffer severe neck and shoulder injuries.Steve was referred to Brian Beckcom at VB Attorneys to handle his case. The truck drivers’ insurance company, Travelers’ Insurance originally offered to settle the case for a mere $30,000.”We knew what the insurance company was doing, we see it all the time,” said Brian Beckcom, one of the founding partners of the law firm. “They [insurance companies] like to use all kinds of tricks and low ball the settlement hoping that they can make this go away for as little money as possible,” said Beckcom.The case went to mediation in February of this year where it was ultimately settled for $375,000.  That is more than 12 times the original settlement offer.  The settlement came just days before the case was set to go to trial.

“This is a great result for [Steve] and we are happy we were able to help him get what we feel was rightfully owed to him after his accident,” said Beckcom.