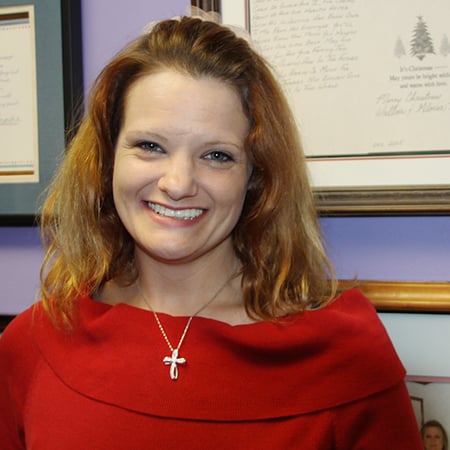 A single mom, Amy worked hard to provide for her three children as a mortgage underwriter in Dallas, Texas. On October 17, 2012, Amy opened the door to the break room to get a drink, just like she had done for months. As she stepped over the threshold, she slipped and fell on her right arm.

The janitor had apparently just mopped the floor but had not put up a caution sign to warn people of the wet floor. Amy’s arm hurt so much they called an ambulance. She was taken to Memorial Hermann Southwest where they diagnosed her with a closed fracture of her right distal radius and ulna. Amy’s company had workers compensation, so she began treating with an orthopedic surgeon the following week. The surgeon ordered an MRI at the beginning of November 2012, which revealed multiple fractures, post-traumatic peritendonitis, and a strain to the scaphoulnate ligament. Her doctor put her in a special splint and told her she couldn’t return to work yet. Her wrist continued to hurt, and she developed numbness and tingling. By December, her condition had worsened to the point where she underwent a carpal tunnel release operation.

Initially, Amy seemed to recover from the surgery. She was even released to return to work. With physical therapy, after a few months, Amy could even carry 10 pounds with her right hand. However, by June of 2013, Amy’s wrist was swollen and hurting her again. Her doctor put her back in a wrist splint, and Amy kept working. Her wrist was continuing to hurt her and she was told to limit how much she used it. By October, nothing had helped. Her doctor recommended that she undergo a wrist arthroscopy with a four-corner fusion. The fusion did not take, and after months of physical therapy, Amy’s wrist was worse than ever. The doctor recommended either a total wrist fusion or a joint replacement.

In September 2014, Amy underwent a total wrist fusion. Her inability to provide for her family, to be able to use her dominant wrist, hand, and arm, depressed her. It seemed that no matter what she did, how hard she tried, nothing worked. Even though the third surgery appeared to take, her wrist was still painful and she would never regain full use of her wrist.

Amy hired Curtis Bickers in 2013 before her second wrist surgery. Even though her workers comp claim was still open, she was facing months of lost income and the possibility of never being able to use her dominant hand again. Curtis pursued a third party case against the janitorial company. He argued that the company had failed to properly train its employees on how to dry wet floors and had failed to warn Amy and her coworkers of the wet floor.

Amy felt as if she were fighting an uphill battle. Between her wrist and not being able to work, her future was uncertain. She was worried that she would be stuck and unable to provide for her family. Curtis worked up her case and took it to mediation in January of 2015. At mediation, he and the attorneys for the defense were able to come to an agreement. Amy’s case settled for a favorable, confidential amount.