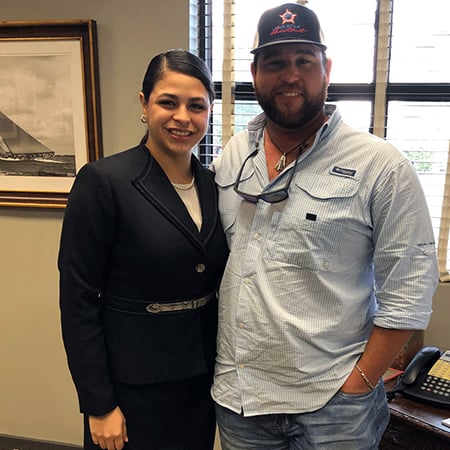 For many people in the offshore and maritime industry, you get a job on a rig or a vessel because your parents, siblings, relatives, friends, or neighbors are in the industry and helped you find a job. You were attracted to the pay, the water, the teamwork, the loyalty, and the work itself. You love your job.

Even if you get hurt, you still love your job and would go back to work in a heartbeat. That’s why, when you get hurt on the job, it can be difficult to file an injury claim or take any action against the company. Even though it’s your constitutional right to receive maintenance and cure and file a Jones Act claim.

Roustabout develops back pain on a hitch for Rowan

Our client had spent eight and a half years working his way up the ranks at Rowan. He loved being a roustabout. One day, late into a hitch, our client woke up with pain in his lower back. He reported that his back was hurting, and it was documented as a non-work injury. He finished his hitch, came home, and saw his chiropractor. The next month, toward the end of another hitch, he woke up with back pain. This time, it was shooting down his hip and leg. He reported it again as a non-work injury.

He wound up needing surgery on his lower back to clean up and fix the damage to his spine. He wanted to get back to work, so when his surgeon cleared him to work, he went to get cleared by Rowan’s doctor. Rowan’s doctor refused to clear him to go back offshore. Their doctor said our client needed yet another back surgery because he needed more discs fixed.

Eight and a half years of dedicated, hard work on Rowan’s rigs had taken a serious toll on Nick.

Barking up the wrong tree

Our client felt fine. So he should have been able to go do the work he loved. Because Rowan refused to let him go back offshore, he was stuck on disability until he got cleared by the company doctor. He fought with them until his long-term disability ran out.

He was barking up the wrong tree. He hired a lawyer who had never heard of maritime law. Because this lawyer didn’t know about the Jones Act, he filed an EEOC claim under the Americans with Disabilities Act. Our client knew he wasn’t disabled, he had had a successful back surgery. He was even working again since his disability had run out. He realized he’d hired the wrong lawyer after doing some research. In March of 2017, he turned to us for help.

This case is a good example of how repetitive work injuries qualify as Jones Act claims. In this case, we found there weren’t enough ergonomic safety measures in place. Under the Jones Act, employers have to provide mariners with a safe place to work. Failing to provide the right ergonomic policies makes the workplace unsafe and the vessel unseaworthy, which are violations of the Jones Act.

Rowan has been in the global offshore drilling industry for over 90 years. This is not a company new to the Jones Act or to safety laws. Rowan is fully aware of their duty to provide their employees with safe places to work. They know the risks that long-term employment on a rig and the permanent effects this kind of labor-intensive work can have on a person’s health.

The company knows it owes a duty under the law to warn workers of known hazards or dangerous conditions on the rigs, as well.

In most Jones Act injury lawsuits, the company fights the injury claim. In this case, the company did not dispute the injury claim. Instead, they pushed our client out the door when he came back ready to work. They failed to give him a reasonable explanation or any documents about his firing. He started to get suspicious, which is why he filed the EEOC claim.

The company has known for decades that, without proper body mechanics, training, and supervision, people will get hurt. Ergonomic policies are crucial to doing heavy, hard work safely. Rowan also failed to provide our client accurate or comprehensive ergonomic training. Rowan’s own training records show that our client was never even officially provided any ergonomic training by the company.

Our client, who has been continuing to work since his long-term disability ran out, has had his instincts validated. He is still loyal to this company, but he wants to see them operate safely. He doesn’t want anyone else to get hurt. While he can’t work offshore anymore, he is looking forward to using some of his settlement funds to help him start a new career.