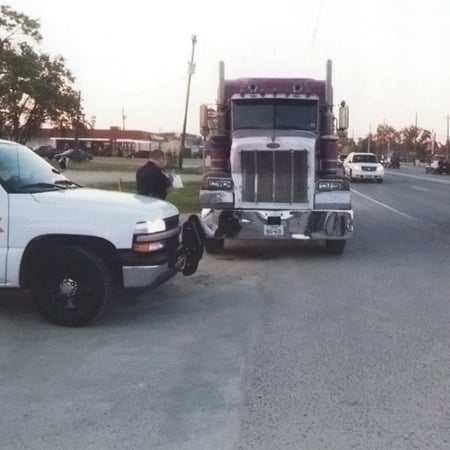 Jose, an over-the-road truck driver, was driving his 18-wheeler westbound on the Beaumont Highway and stopped in the left hand turn lane waiting to turn southbound on to F.M. 526. After Jose stopped, a different 18-wheeler rear-ended him. Eddie Lee Tyner was driving the 18-wheeler that hit Jose’s 18-wheeler. At the time of this 18-wheeler accident, Mr. Tyner was on the job for Rebel Trucking, LLC.Jose hurt his neck in the crash. His doctors performed a neck fusion surgery about a year after the accident. Jose also missed a lot of work while he was receiving medical treatment.

Jose hired our firm to pursue a claim for him. Initially, the trucking company denied his injury claim. The trucking company argued that Jose could not have been hurt in this crash. However, after obtaining medical records and taking the testimony of various healthcare providers, we demonstrated that Jose indeed injured his neck due to this 18-wheeler crash.

We also proved the trucking company failed to have its driver undergo the DOT required post-crash drug and alcohol testing, and failed to maintain copies of its trucker’s qualification, training, and supervision files, including his driver’s logs.

We negotiated Jose’s case at a mediation. The trucking company only offered $150,000 at mediation. After the failed mediation, we continued to work up the case. As the trial date approached, we negotiated a $400,000 settlement for Jose. Attorney’s fees are $160,000, and litigation expenses are $22,500.