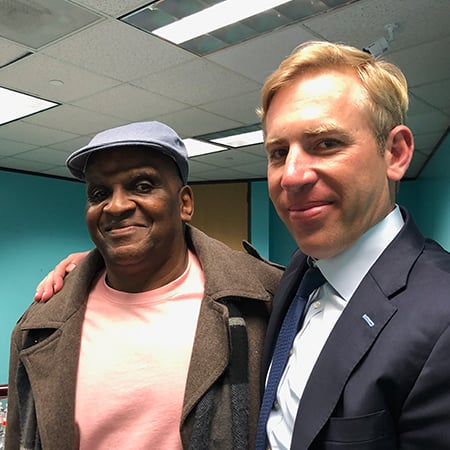 Johnny was a 20-year veteran in the logging industry in East Texas. One day in 2007, Johnny was working as an independently contracted day laborer for Ramrod Enterprises at the company’s timber facility in Conroe, Texas. He was helping people use massive machinery to move logs, when a log being moved by a Ramrod Enterprises employee struck him on the head, splitting his head open. The EMTs determined he had a Glasgow Coma Scale (GCS) score of 5 at the scene of the accident, meaning he had suffered a severe brain injury. He was life-flighted immediately to the emergency room at Memorial Hermann.

He was hospitalized for three weeks with a head injury and underwent multiple surgeries to attempt to repair the damage caused by the log. He sustained severe memory damage and vision loss in his left eye.

Because he was injured at work, his family tried to file a worker’s compensation claim. The company argued his employment status as a day laborer and tried to deny his claim. Their actions delayed Johnny’s rehabilitation efforts and the medical bills started to pile up.

Johnny’s wife, Carolin, knew that he needed serious help. She started searching for the best legal team she could find and chose to hire our firm to handle Johnny’s case.  Brian Beckcom was the lead attorney on the case, and he filed the case in Harris County, Texas. Ramrod Enterprises had liability insurance with Hanover Insurance Company. The two companies fought Johnny’s injury claims and counted on their army of highly trained adjusters, lawyers, and experts to make his claim go away.

The company lawyers argued that Johnny was a “borrowed servant” of Ramrod Enterprises.  If this was true, then Johnny’s case against the company would be barred by the Texas Workers Compensation Act because the company had workers compensation insurance and Johnny would be considered to be an employee of the company. Employees of employers who have workers compensation insurance cannot sue their employers. But Johnny was an independent contractor. This allowed him to sue Ramrod as a “third party,” meaning he could sue for gross negligence.

Brian Beckcom defeated all of the companies’ defenses and negotiated a $4,000,000.00 settlement for Johnny at mediation that will take care of his medical needs for the rest of his life. While he will never be the person he was before the accident, he and his family are able to live without worrying about whether or not they can afford to pay for his healthcare needs.

Since the case ended, Johnny and Carolin have worked on his recovery, with Carolin being his full-time caretaker. They enjoy gardening and traveling to Arkansas to see their families.

“Thanks for everything you’ve done for us. I know any case that you take they are in great hands.” – Johnny and Carolin H., former logger, Texas