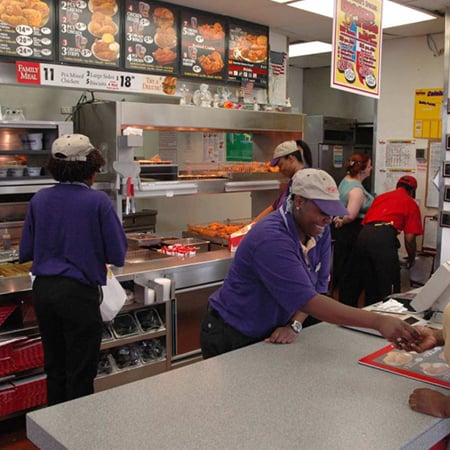 On July 28, 2004, plaintiff Debra Singleton, 48, an assistant manager, slipped and fell while working in the kitchen of a Popeye’s restaurant in Houston.

Singleton sued her employer, Southpoint Consolidated LP, Phoenix, Ariz., operating as Popeye’s Fried Chicken & Biscuits, alleging negligence under a theory of unsafe workplace conditions and operating procedures in that loose floor tiles created a dangerous condition that caused her to slip and fall. City of Houston health inspectors had found defective tiles on the floor before the incident. Singleton alleged that Popeye’s knew about unsafe workplace conditions and failed to take appropriate steps to remedy the condition. Singleton also alleged another possible cause was a grease and water spill that should have been cleaned by another employee.

Southpoint denied that it was negligent, claiming that Singleton was the assistant manager, therefore she was 100% responsible for the condition of the store and the work and training of its employees. Southpoint also disputed whether Singleton fell in the area of the loose tiles and whether the tiles had been repaired before her accident.

Singleton reported an injury to her low back and was sent to company doctors for treatment. After two months of physical therapy, she want sent to a doctor who recommended a lumbar fusion at L4-5 and L5-S1. The doctor testified by video deposition that surgery was needed partly for the fall and partly for Singleton’s degenerative back condition. Defense counsel reported that a neurosurgeon testified by video deposition that he recommended a discectomy.

Southpoint sent Singleton to a pain management doctor who testified that her problems were entirely preexisting and a result of her age and weight. He scheduled Singleton for an EMG but she was non-compliant. The doctor found that Singleton was capable of light-duty work. Thereafter, Southpoint refused Singleton further medical treatment.

Singleton was off work for more than two years.

Southpoint claimed that she was malingering. Further, it contended that Singleton reported at least four other on-the-job injuries in the two-year period predating the fall, including one in which she claimed back and neck injuries.

The jury found that Southpoint was negligent and awarded Singleton $368,000. The award was reduced by $22,000 because of a previous ERISA payment.

Plaintiff’s counsel reported that, in talking with the jurors post-verdict, he found that more than half of them wanted to return a multi-million-dollar verdict. He was told that the majority of deliberation time consisted of the foreperson convincing the other jurors to give less than that.

Defense counsel reported that two or three jurors wanted to give more because they thought companies always cheat their employees.