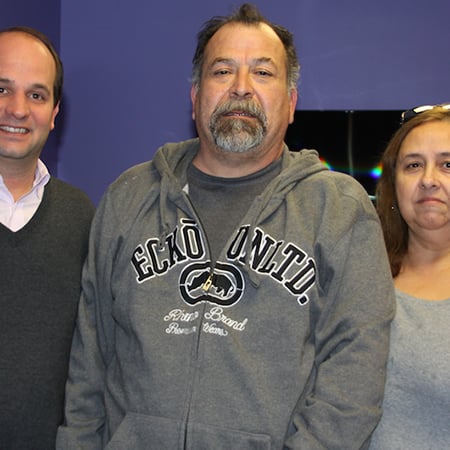 South Texas’s recent oil boom has provided good work for thousands of people, one of whom was Ricardo. Since 2010, he’d worked for several oilfield services companies as a truck driver. He was reaping the benefits of boomtime and enjoyed the work.

One day in September 2012, Ricardo was at a rig site, pumping mud into his truck when another oilfield services company’s truck pulled up next to him. The employees of the other company got out and started washing out the truck. They needed to flush out their truck, so they went to open a valve to release the contents. Instead of opening the valve on the side of the truck where no one was standing, they accidentally opened the valve on the side of the truck closest to Ricardo. He was struck in the back of the head and neck by pressurized water and bits of concrete moving at a very high velocity. He was taken to the emergency room where he was diagnosed with a concussion and a sprained neck.

Ricardo treated under his company’s workers comp for three months. During that time, his headaches only got worse and he developed difficulty swallowing. He was diagnosed with esophageal cancer. Workers’ comp closed their claim, but Ricardo wasn’t sure if he was still feeling the effects of his injuries or if the issues he was having were all to do with his cancer.

Ricardo talked to a law firm in San Antonio that took on his case. However, he was not impressed by their inaction on his case. A year went by and he was still in limbo. He and his wife started looking up cases similar to his and came across our website. In December 2013, they talked with Vuk and hired us to take on their case. Curtis filed a third-party lawsuit against the company that employed the three workers who caused Ricardo’s injuries.

We alleged that the oilfield services company was negligent in the hiring, training, and supervision of its employees and was responsible for Ricardo’s injuries. We began working up the case and investigating Ricardo’s accident.

In June of 2013, Ricardo received some excellent news, his cancer was in remission. Unfortunately, around the same time, he lost his job and his health insurance. As much as he wanted to be happy that he was cancer-free, he was really worried about his future. He still didn’t feel well, and his back was still hurting him. He wasn’t sure what he should do, so he went to the doctor. It turned out he needed a surgery to decompress several discs in his spine. He chose to not go forward with the surgery because he knew firsthand the pain people felt from unsuccessful spinal surgeries. Several friends and relatives had undergone spinal surgeries and lived in constant pain.

Eventually, when presented with evidence, the oilfield services company admitted they were at fault for the accident. So when Curtis took Ricardo’s case to mediation in January 2015, he was able to obtain a satisfactory settlement for Ricardo that same day.

“I highly recommend them to anybody.” – Ricardo G., Texas oilfield worker who suffered a work injury, Kenedy, Texas