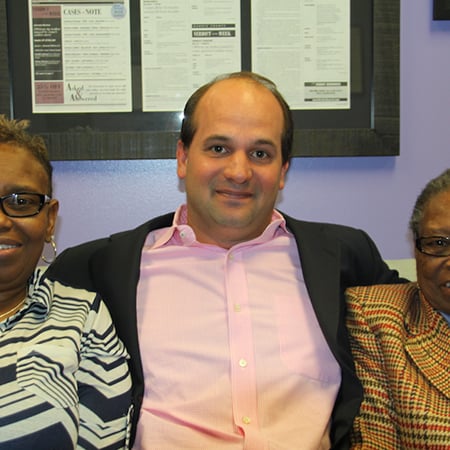 Lois and Onie are mothers, survivors, and caregivers. They’d raised children, buried partners and husbands, and were now taking care of each other. Lois survived breast cancer, and her faith in God strengthened after a heart failure scare. This accident was unpleasant, but they were still in one piece and had each other. After 911 was called, statements were made, and Onie was transported to the hospital, they figured they’d get the car fixed and that would be the end of that unpleasant moment. Lois and Onie were headed to Wednesday evening services at church, part of their usual routine, when they were suddenly rear-ended by a Mr. Rooter van. They’d stopped at a yellow light when all of a sudden there was a bang, they were suddenly pressed to their seats by their seat belts, and they saw their glasses and phones flying all over the place.Except they had both suffered rotator cuff tears. They tried to get better and went to the doctor, started going to physical therapy, and hoped their shoulders would heal. After about a month, physical therapy was definitely not helping them, but only aggravating their shoulder pain. They both underwent surgery to repair the rotator cuff tears.With medical bills, car repair bills, and a still-damaged car, they knew they needed help. They hired Curtis Bickers to help them, and he started working on their case. He filed a lawsuit against the driver, Mr. Eduardo Hernandez, and Mr. Rooter. He found out that Eduardo was employed as an excavator for Mr. Rooter and that Mr. Rooter owned the van that Eduardo was driving at the time of the accident.

During Curtis’s investigation into the accident and into Mr. Rooter’s safety policies, he discovered several huge discrepancies. When Eduardo gave his statement to the investigating officer at the scene of the accident, he said he’d turned to look to see if he could change lanes, and when he looked back, he noticed the light was turning yellow and didn’t have time to stop. However, when he gave his statement to Mr. Rooter, he made no mention of changing lanes or turning to look to change lanes, he just said that the light had already turned yellow and that the car in front of him stopped.

His conflicting statements were only part of what discredited him. Eduardo quit working for Mr. Rooter shortly after the accident and was unavailable to testify. Another problem for Mr. Rooter was that, while the company had a safe driving policy for employees to adhere to, the corporate representative for Mr. Rooter testified in his deposition that there were no systems in place to ensure that their employees were competent drivers or that they were trained to safely drive a commercial vehicle.

Curtis mediated their case in February 2015. While Lois and Onie hadn’t claimed lost wages, they still had about $20,000 in unpaid medical bills and had had to sell the car. Mr. Rooter, faced with contradictory evidence and the sisters’ medical bills, agreed to settle the case at mediation. Lois and Onie agreed to a $120,000 settlement that they plan to put to good use as they settle back into their routine, take care of each other, go to church, and enjoy spending time with their children and grandchildren.