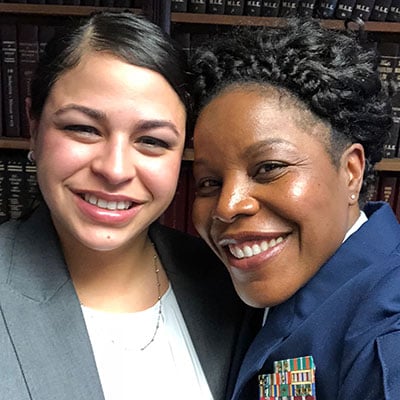 When a truck driver for a national moving company failed to pay attention behind the wheel, he wound up running two cars off the road and hitting them. He hit a state trooper and a member of the U.S. Coast Guard. He then failed to try to help either of them. He claimed to not remember the crash at all.

Our client, a Command Master Chief of the U.S. Coast Guard, had to be rescued from the wreckage by the fire department’s jaws of life since the 18-wheeler had hit the driver’s side of her car. Her airbags had deployed on impact. Once the first responders rescued her, she was taken to the emergency room via ambulance.

What made this wreck even more difficult was that she had just finished physical therapy the previous week. She’d been going to physical therapy to recover from rotator cuff  surgery on her right shoulder. MRIs showed this wreck wiped out all the progress she had made on her shoulder recovery. This wreck also damaged her left shoulder and her right ankle. She had to have surgery on both.

She was on her way back home after visiting her family for Memorial Day in 2014. This wreck negatively impacted her life and her ability to serve her country. Our client couldn’t risk getting her claim denied. She needed her life back, fast. She hired us to help her.

We uncovered evidence that the company overworked the driver so much that he wasn’t just fatigued when he crashed into our client, he was asleep. He couldn’t remember the crash at all.

Falling asleep behind the wheel is a dangerous safety failure. Trucking companies and truck drivers must follow strict safety laws to protect everyone’s safety, including the safety of the truck driver. Failing to follow any of the laws puts all of us at risk.

Even though it’s been more than four years since the wreck happened, our client still suffers from pain in her shoulders, back, neck, and ankle. The pain jeopardizes her future ability to work and to serve our country. Doctors and economists who examined our client determined that she will most likely not be able to continue to work or be as physically active due to the injuries she suffered in this wreck.

The lawsuit took nearly four years to resolve. Now, our client can get closure, put this 18-wheeler wreck behind her, and continue serving our country like she has for the last two decades. We are honored to help her as well as other service members and veterans. If you have a similar story, get a free consultation now. Our experienced trial attorneys will help you determine if you have a case, answer all of your questions, and help you make an informed decision about your next steps. Call now at 877-724-7800 or fill out a contact form.