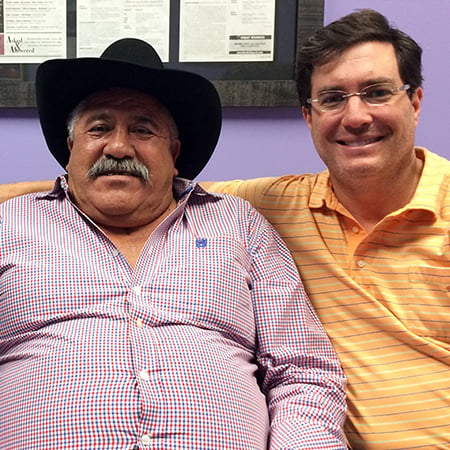 On February 23, 2013, Inocencio and his crew were placed with a ship cleaning company called United States Maritime Services (USMS). USMS had been hired by Moran Towing Corporation (Moran) to clean one of Moran’s vessels in the Port of Corpus Christi. The vessel was the Montville, an oceangoing single-hold dry bulk barge. The Montville had just finished discharging a load of soybeans, and the barge needed to be cleaned so it could deliver its next load.

The USMS crew was in the hold of the Montville cleaning it. As the foreman of the cleaning crew, Inocencio was on the deck of the barge monitoring the work of his crew. While Inocencio was supervising his crew, a large gantry crane moved along its tracks on the barge, struck Inocencio, and dragged him approximately 30 feet. The gantry crane was operated by a Barge Supervisor employed by Moran. Emergency personnel arrived and rushed Inocencio to the hospital.

The accident left Inocencio with multiple internal crush injuries and he underwent several surgeries to try and repair the damage. He was in a coma for the first few months after the accident. He wound up having to stay in the hospital for 10 months.

As a young man, Inocencio started working as a longshoreman to see the world. He joined the International Longshoreman’s Association (ILA) union and crisscrossed the globe working on all kinds of ships and barges. He was proud of being able to provide for his family and to have a great career. He was a hard worker and quickly moved up the ranks in his union as he became more experienced.

His union cleaning crew would be hired by vessel owners to clean ships and barges when they came into port and changed loads. The ILA would send Inocencio and other longshoremen to the vessel to clean it and get it ready for its next voyage. With thirty years of experience cleaning ships and barges under his belt, he was promoted to be the foreman of his ship-cleaning crew.

Inocencio planned to keep working for another twenty years and save enough to buy a place in the country for him and his wife to enjoy their old age. Having grown up on a ranch, he looked forward to having horses and cows of his own. The accident on the Moran barge was devastating. His future had turned into a lifetime of pain and doctor’s visits. He could no longer work or provide for his family.

It soon became clear to his family that Moran was not taking responsibility for what its Barge Supervisor did. They knew they needed help, so Inocencio and his family hired Vuk Vujasinovic and VB Attorneys.

Depositions, inspections, and experts: building a case for negligence

Vuk filed Inocencio’s case in Corpus Christi, Texas, where it was placed in federal court. The case was brought under maritime law, involving a statute called the Longshore and Harbor Workers’ Compensation Act (LHWCA). Specifically, it was brought under Section 905(b) of the LHWCA, which protects longshoremen if they are injured due to the negligence of the vessel’s owner or operator.

Moran and its team of lawyers vigorously fought the case. But Vuk kept working. He deposed over 20 witnesses in Connecticut, Georgia, Wisconsin, Louisiana, Texas, and several other states.  He also went on multiple inspections of the vessel on which Inocencio was injured.

Vuk engaged a crane safety expert and a maritime expert to investigate the accident. Their investigative reports gave Vuk the ability to show exactly why the crane struck Inocencio, and why Moran should be found guilty of negligence.

The case settled shortly before trial. The settlement is confidential at the request of Moran. After Inocencio’s case settled, he sat down with us to talk about his experience working with us. He says:

“I got hurt on a barge. When I got hurt, Vuk, helped with my case. I am very grateful. He did a very good job for me, along with his secretaries and everyone else.