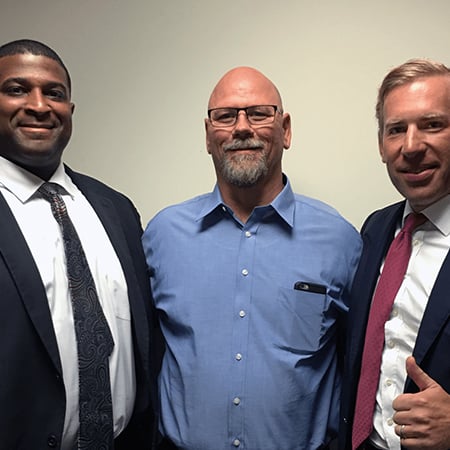 LJT Transportation was put under a Department of Transportation audit in June 2013. While under a federal safety audit, they hired a truck driver who had just been fired for rolling a truck. This truck driver had 13 violations on his record between 2005 and September 2013, including a violation for rolling the truck. LJT knew about the truck driver’s dangerous driving record and chose to put him behind the wheel of their trucks. Gene paid the price.

On a dark Monday morning in September 2013, Gene kissed his wife goodbye and headed off to work. After leaving his subdivision and turning onto the westbound feeder road of I-10 in Houston, he stayed in the left lane because he would enter the freeway after the next stoplight. Suddenly, seemingly out of nowhere, Gene was hit from behind by an 18-wheeler. His bike spun out of control, sliding across three lanes of traffic to come to rest at the curb. Gene’s immediate thought was to make sure nothing was broken.

He’d suffered road rash on his hands, arms, legs, and thigh. It was unbearable – he couldn’t keep from crying out in pain. A woman bent over him, asking his name, if he was ok. She was on the phone with 911 and parked her car behind Gene and his bike to protect them from oncoming traffic.

As an EMT, Gene knew not to move until he was stabilized. All he could focus on was the searing pain from his skin ripping off while being catapulted across the pavement.

When a police officer and an ambulance arrived on the scene a few minutes later, Gene was checked out and the scene was investigated. The police officer discovered that the truck driver had been trying to exit the highway and get across 3 lanes of traffic to make a right turn. In Monday morning traffic in Houston.

Gene drove motorcycles for decades and never had a single driving violation. Safety was paramount to him. He chose his route to work based on which was safest. Getting hit was the last thing he wanted. The morning of the wreck, Gene wasn’t texting, he wasn’t distracted, and he wasn’t speeding. His only mistake was that he didn’t have eyes in the back of his head.

Wreck erases all progress motorcyclist had made after back surgeries

Gene was a warehouse supervisor, a job that required him to walk over a million square feet every day. Like most 57 year olds, Gene didn’t have a perfect body. He had two operations on his back. One in 1999 and a revision surgery in 2012. His doctor gave him the all-clear to resume his normal life eight weeks after surgery in 2012. This wreck erased all the healing and progress he’d made.

His wife got suspicious of the trucking company when she heard what happened and started researching his legal rights. She reached out to us for help. We began investigating right away.

Evidence disappears quickly after wrecks, so part of our efforts included preserving Gene’s bike and having accident reconstruction experts analyze the truck, the bike, and the physical evidence at the scene of the collision.

Gene’s back went from bad to worse in the days and weeks following the wreck. A third surgery was recommended. Physical therapy and a conservative treatment plan wasn’t giving him any measurable relief from his back pain. His medical bills had quickly reached more than $80,000.

Trucking company refuses to take accountability for their unsafe driver

We gave LJT a chance to do the right thing and take accountability for their driver’s unsafe behavior. They refused.

LJT’s decision to put profits over safety left Gene facing a third back surgery and unable to do his job. Or ride his bike. The company’s irresponsible and dangerous behavior caused Gene to have to give up his hobby and passion – his motorcycles.

Gene’s case went to court in May 2016. At trial, LJT’s attorneys said that because his back wasn’t perfect before the wreck, he didn’t deserve to be compensated for his injuries. Brian and Byron argued that this went against the very fabric of our laws in the United States. We don’t discriminate against people who are more vulnerable than others.

The jury returned a verdict in Gene’s favor after hearing both sides of the story. They gave Gene $219,500.

Gene’s back will never be the same, but he won’t let that stop him from chasing his dreams. He’s working again and is still under treatment for his back. Gene says:

“In September 2013 I was struck by an 18 wheeler exiting the freeway while I was riding my motorcycle. I was knocked off the motorcycle at 45 mph and rolled across three lanes of traffic. I was transported to the hospital for my injuries. Within three days after the accident I started having issues with lower back pain. After being referred by another attorney I contacted VB Attorneys and met Brian Beckcom and what a blessing that was for me and my family.

“After many doctors’ visits it was determined that surgery would be required for my injuries after one year had passed. Brian and Byron made sure I got the best care needed in order to recover from the injuries sustained in the accident. When it came to a trial date it was amazing to see how Brian’s team (Byron, Lena, Patti & Emily) made me feel that they were the best representation needed to win my case. At the end of it all the verdict was in my favor and I was not at fault and justice was served. I can tell you that this was a three year process and I could not have asked for a better team to fight for me. I would recommend this team to anyone looking for the right people to represent them in an injury case, you could not ask for any better they truly cared about you as a client.

“Plus a special thank you for Patti who always had an answer or got one when I had concerns during the case. We built a personal bond and that helped me so much getting through all of this process.

“VB Attorneys you are awesome and you did more for me and my family than you will ever know. Don’t stop doing what you do best and that is caring for the people you represent.