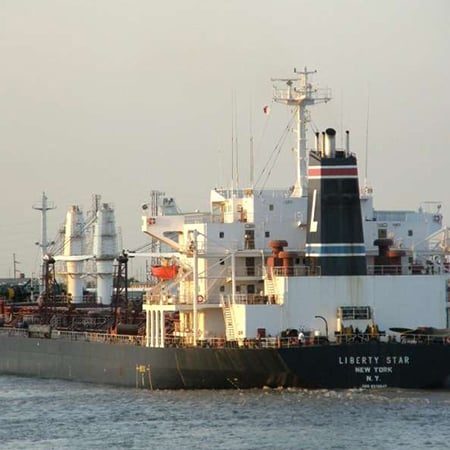 The Chief Cook aboard the M/V Liberty Star suffered a hernia and a back injury while trying to lift an extremely heavy box of frozen meat by himself.  The Liberty Star is owned and operated by Liberty Maritime Corporation and Liberty Star Shipping Corporation.

He reported his injury and was sent to his cabin. He had a bulge in his abdomen and his back was hurting him. When the ship arrived in the next port, he was flown home where he was sent to the doctor. He was diagnosed with an abdominal hernia and herniated discs in his back. He had the hernia operated on right away but realized he was still in pain. His back was hurting him. He began conservative treatment for his back after he recovered from the hernia operation.

His medical bills were piling up. He wasn’t able to work. Liberty Maritime was paying him only $16 a day in maintenance. He hired our firm to help him be treated fairly by the company. We filed a Jones Act lawsuit on his behalf in Harris County.

The company hired a doctor to examine our client. That doctor called our client a “malingerer” and said he “doubted the veracity of his claims.” The company denied it was responsible for the seaman’s injury, however, several witness depositions established the company was at fault for the injury.

Vuk negotiated a confidential settlement at a second mediation of the case.