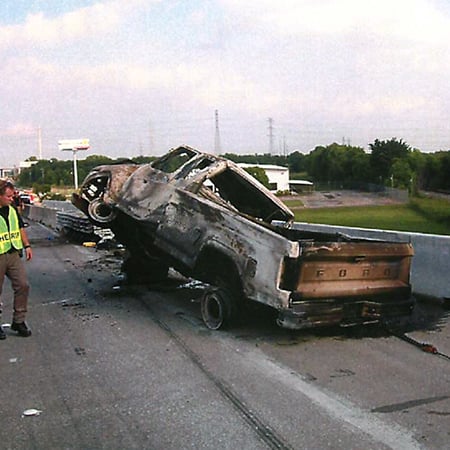 On June 1, 2004, at 3:50 p.m., Juan was riding in the bed of a Landscape Consultants of Texas (LCT) pickup truck on his way back from work. The pickup was being driven by Abraham Soto and was towing a utility trailer that was owned by LCT. Three other LCT employees were riding in the cab of the pickup. They were traveling southbound on highway 249 in Northwest Houston when the truck skidded right, into the shoulder, where it crashed into a metal barrier. The truck turned on its side and caught on fire. Juan was ejected from the truck bed and fell to the ground below the overpass on which the truck was located at the time of the wreck. The other LCT employees survived with minor injuries.

Juan’s wife and eight children hired our firm to sue LCT and Soto for negligence. In our lawsuit, we claimed that Soto failed to keep a proper lookout and caused the accident that led to the Juan’s death. We also claimed that LCT was vicariously liable for Soto’s negligence and that it negligently failed to provide the employees with safe transportation equipment. Soto stated at the scene of the wreck that a green car cut him off and caused him to swerve right and skid. LCT backed-up Soto’s story and contended that it provided its crew with safe transportation equipment.

Juan fell 26 feet to his death. We hired a forensic engineer to determine why Juan was flung over the side of the overpass to his death when the pickup truck turned over. The engineer determined that the 1985 F-250 was hauling a two-ton trailer that didn’t have brakes and was traveling at 52 mph at the time of the crash. The force was enough to send Juan over the guardrail onto the roadway below. The pickup caught fire on impact. He was found to have suffered a fractured skull, broken ribs, contusions on his heart, and 2nd and 3rd degree burns on his body. The fire had burned throguh his pants and through one shoe.

Witnesses at the scene claimed that they saw a guy on fire, stopped their car, and ran to Juan. They pulled him to the side of the road, extinguished the flames, and said that he was a little conscious and mumbling. EMS arrived 10 minutes after 911 was called, and took 10 minutes to pronounce Juan dead. The defense claimed that Juan did not experience any conscious pain or suffering in the accident. Their argument was backed up by the medical examiner.

In 1972 Juan married Eloisa in a church in Valle, Mexico. He worked in the U.S. as a landscaper, and she cleaned houses when they needed extra money. They raised eight children and were happy. When Eloisa heard about her husband’s death, she collapsed and had a stroke because she was so upset about her loss.