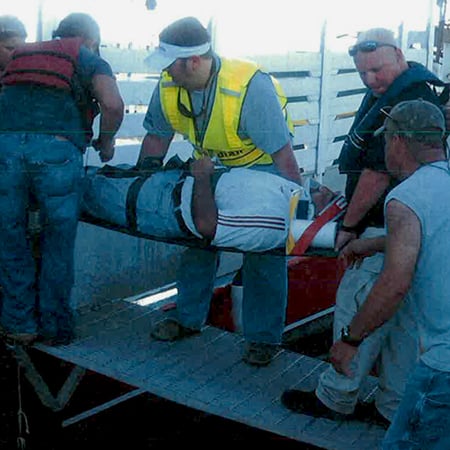 A concussion with repercussions

You could say the ocean was in Abelardo’s blood. He and his wife were both boat captains, and their son had followed in their footsteps. Living in southern Louisiana, they usually worked fishing for oysters. After the Deepwater Horizon spill in 2010, Abelardo was working with a fleet of fisherman out of St. Bernard on clean-up efforts. His son was running Abelardo’s boat, while Abelardo had been assigned to be the captain of another oyster boat.

One morning in August of 2010, Abelardo, his wife, his daughter, and three deckhands were getting ready to leave port when Abelardo realized the battery had died. They were still connected to shore power, so he asked for a battery charger to be passed down to him in the engine room. He took it and went to go plug it in. He was wearing a hard hat, but as he bent to access the low-hanging area where the charger needed to go, a boat passed by, generating wake that sent his boat rocking. The boat didn’t have any and rails or holds in the engine compartment for him to grab onto. He lost his balance and smacked his right temple on the ceiling. The force of the impact and the continued movement of the boat caused him to fall backward, hit his head hard on the battery, and lose consciousness. He’d lost his hard hat in the initial impact.

Abelardo’s wife heard him fall, and went racing down into the engine compartment. She couldn’t reach him in time. She called for the deckhands to help get him upstairs and off the boat. He was taken by ambulance to the hospital, where he was diagnosed with a severe concussion. His accident was reported right away and the company lost no time in sending out a claims adjuster.

Abelardo didn’t know the claims adjuster wasn’t there to help him. He thought the adjuster was helping him. But when the adjuster insisted Abelardo only see certain doctors, Abelardo got suspicious. He had recovered from his concussion but now was experiencing widespread numbness throughout his body. He and his wife started looking online to find out their options. They hired Vuk and Sean to pursue a Jones Act case against Abelardo’s employer. Vuk and Sean fought to have Abelardo be able to see his own doctors and hired an expert to inspect the scene of the accident.

Their Jones Act lawsuit asserted that the company’s vessel on which Abelardo was working was unseaworthy and contributed to Abelardo’s accident. The company’s response denied their assertions and claimed that Abelardo had failed to mitigate his injuries in any way. With Abelardo under the thumb of their claims adjuster, he hadn’t known his right to see his own doctors and seek his own medical treatment. He was stuck. It was a trap designed by Jones Act employers to reduce their liability and throw blame onto the injured employees.

The company went further and declared that Abelardo had to see a doctor and undergo an insurance medical examination (an IME, for short). IMEs are performed by a doctor hired by the defense, someone who has never met or treated our client. It was an unecessary tactic being used by the defense to attempt to prove they weren’t liable for Abelardo’s injuries.

Vuk, Sean, and our firm’s appellate attorney, Kenneth, fought to have the IME quashed. They were successful, proving that it was an unnecessarily intrusive fishing expedition on the part of Abelardo’s employer. The maritime expert we hired said the vessel was unseaworthy for several reasons, that the company should have installed handholds or rails in the engine room, as the risk of losing one’s balance in that room while the boat was underway was high. He also said that the batteries should never have lost power in the first place, that Abelardo should never have had to plug in a battery charger. He said the company should have known about the battery issue and inspected the electrical system and batteries to ensure they were functioning properly.

The company kept insisting, even though unseaworthiness had been proved by our expert, that they weren’t liable for Abelardo’s continued numbness. Abelardo continued to be treated with little to no improvement by a neurologist. He claimed he was unable to lift anything and couldn’t go back to the often back-breaking work of oyster-fishing or helping clean up the BP oil spill.

The company fought the lawsuit, but Abelardo had the Jones Act on his side. The case was set to go to trial at the end of April, 2014. The company was still prepared to offer nothing. Sean took the depositions of the company rep and Abelardo’s wife in early April. The company rep reported that the company had followed company policy and had not sent anyone down to the dock to investigate Abelardo’s accident.

Sean settled the case for a confidential amount shortly before they were set to begin trial.