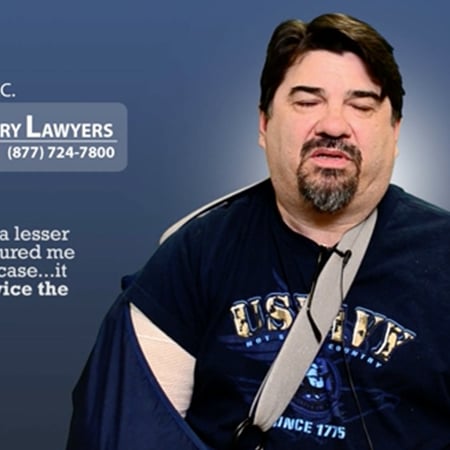 Andy won a verdict from a jury in Houston federal court for approximately $500,000 in his injury lawsuit. The verdict is 75% more than what the insurance company had offered before trial started.Andy has been a machinist with General Electric for over 20 years. GE hired a machine manufacturing company, Coldwater Machine, to build it an industrial machine for GE’s Houston workers so that their jobs would be easier. It was a good idea, in theory.
After Coldwater built the machine, GE requested the company train its employees on how to use it. Coldwater representatives came to Houston to train the GE workers on its machine; Andy was one of the workers who was being trained.During the training session, as Andy was hooking an air line to the machine, one of its compontents violently smashed him in the face, snapping his head back. Andy suffered a neck injury that involved a herniated disc. This injury didn’t heal and Andy will need to have a surgery to repair the damage to his neck.

Coldwater Machine refused to accept any responsibility for what happened to Andy. So Andy hired us to represent him. Because it was Coldwater Machine’s equipment that caused his injury, we were able to pursue a third party case against the company. We filed Andy’s work injury lawsuit in Houston, and the case ended up in federal court before Judge Keith Ellison.

Through the information gathering process of the lawsuit, we determined that Coldwater Machine violated at least four important safety rules:

We hired a work safety expert who noted that Coldwater violated multiple OSHA safety rules that caused Andy’s work accident. We proved Andy’s injury and damages through collecting his medical and billing records and wage loss records, and in obtaining the sworn deposition testimony of Andy’s neurosurgeon, who recommended Andy have a neck fusion surgery at the C6-7 level in his neck. We used a video demonstration to show the jury the surgery Andy needs.