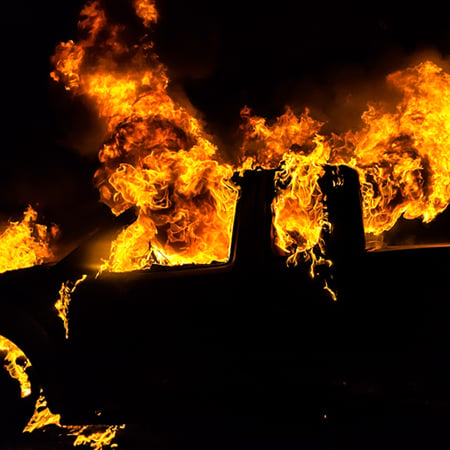 Ryan, a 23-year-old man, was driving a 1997 Ford Ranger on Interstate 45 between Houston and The Woodlands when his vehicle caught fire. Ryan first noticed the fire to his right and behind him. He believed that it started between the bed and the cab of the truck, broke through the back passenger window, and came into the truck and burned him. However, an expert in Ryan’s case later suggested that the fire had actually originated inside the cab. The incident occurred while Ryan was driving in lunch-hour traffic, and he had to maneuver his vehicle over four lanes of traffic before stopping on the shoulder and getting out of the vehicle.

In the fire, Ryan sustained very serious second- and third-degree burns to his face, neck, both arms, and both hands. He was transported to Hermann Hospital, where he was treated for three days. He was then transferred to Brook Army Medical Center, where he was treated for over one month. Ryan was diagnosed with second- and third-degree burns over approximately 20 percent of his body. He underwent three excision and grafting surgeries at Brook Army Medical Center.

Expert offers opinion that the vehicle was defective

With the help of VB Attorneys, Ryan filed a claim against Ford and the dealerships that handled his truck. He alleged that the Ranger was defectively manufactured, and it had malfunctioned and caused the fire. His only liability expert was Keith Fowler, a specialist in the cause and origin of vehicle fires, with a background in vehicle mechanic work. Fowler determined that the fire originated inside the cab of the vehicle, inside the right passenger door. Fowler further determined that the fire was caused by an overcurrent in wiring connected to the vehicle’s interior lighting system, based on his finding that the wiring had separated and beaded in this area. Ryan could not say what caused the overcurrent in this wiring, but he maintained that it must have resulted from some type of malfunction.

Ford had previously issued a technical service bulletin advising dealerships to remove a module connected to the interior lighting system. This module had never been replaced on Ryan’s vehicle, and it was connected to the wiring that had separated and beaded. Ryan had brought his vehicle to a dealership on three occasions complaining about a problem involving the interior lighting system, and each time the dealership replaced the door-ajar switch, noting that the switch had shorted. The door switch was also connected to the wire alleged to have overloaded.

Ford denies that the vehicle was defective

In response, Ford denied that the vehicle was defective in any way. Ford argued that the fire originated in the bed of the truck, as originally described by Ryan, and was caused by one of the numerous batteries that he was transporting in the bed of his truck. At the time of the fire, Ryan was transporting approximately 10 alarm system kits, each containing a battery.

Ford correctly argued that Ryan’s theory on the fire’s cause and origin was inconsistent with his observation of the fire originating in the cab and bed of the truck. However, Ford further argued that it was impossible for the fire to occur in the manner in which Ryan alleged it occurred. Ford noted that the current in the interior lighting system was too low to cause a fire. Ford further noted that Ryan was a smoker and that several empty packs of cigarettes were found in the bed of the truck during inspections of the vehicle. Ford further argued that, based on lab testing for accelerants inside the cab, traces of gasoline were noted in that area. Ford further argued that, if the fire did originate inside the passenger compartment as alleged, that Ryan would have noticed the smoke and fire in ample time to react, bring his vehicle to a stop, and get out of the vehicle before being burned.

In addition to suing Ford, Ryan sued Northside Ford, Boggus Motor Sales Inc., and Boggus Motor Company. The Boggus dealerships sold the vehicle, and Ryan non-suited these companies shortly before trial began. Northside Ford performed the service work on the vehicle on the three occasions when Ryan brought it in for problems with the interior lighting system. During mediation with Judge Romeo M. Flores on May 2, 2002, Northside settled for a confidential amount. Ford withdrew its mediation offer before trial.

The trial began on Monday, May 13, 2002. During jury selection by plaintiff’s counsel Vuk Vujasinovic, two of the panel members indicated that they owned 1997 Rangers and experienced problems with the interior lighting system. One of the panel members was selected as a juror.

Ryan and Fowler, his expert, were present at trial. During a hearing after Fowler’s testimony, the court ruled that it was going to admit evidence of some prior incidents where a 1997 Ranger, which had experienced problems with the interior lighting system, had caught on fire. The judge indicated that she would admit this evidence if Ford argued during its case that it was impossible for the fire to have occurred the way in which Ryan alleged it had occurred. It was expected that Ford would indeed argue that Ryan’s theory of the fire was a physical impossibility.

After Fowler testified, and before a videotaped deposition of the treating surgeon at Hermann Hospital was played, Ryan settled with Ford for a confidential amount. Although the settlement amount was confidential, Ford ultimately paid more than three times the amount it offered at mediation.