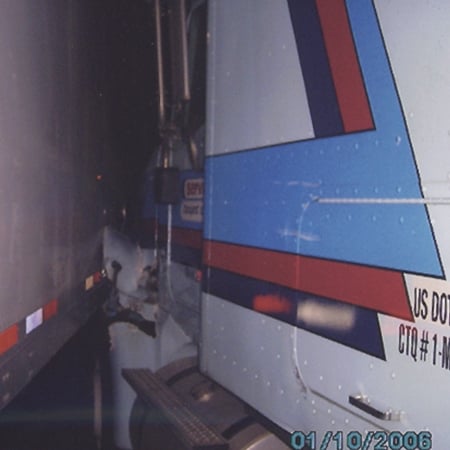 Richard was asleep in the cab of his 18-wheeler in a parking lot when another 18-wheeler crashed in to him. The driver of the other 18-wheeler was trying to pull in to the parking space next to Richard.  Richard primarily injured his neck, where his doctors diagnosed a herniated disc.We filed Richard’s 18-wheeler lawsuit in Harris County, Texas, seeking damages for his neck injury. Our attorney Curtis Bickers handled the case.The insurance company’s main defense is that this was a minor accident, and Richard could not have been seriously hurt in it. To counter this defense, we hired a biomechanical expert to evaluate the crash. Our biomechanical expert determined that the forces of this crash were more than enough to cause a herniated disc in a person’s neck.Not surprisingly, the 18-wheeler insurance company hired an “expert” to address the biomechanical issues who was not qualified to do so, and who has a history of being stricken from cases by judges across the country. This person is Charles E. Bain, M.D. We filed papers challenging Dr. Bain, and we were successful in having the judge throw Dr. Bain out of the case.We settled Richard’s case for $275,000.