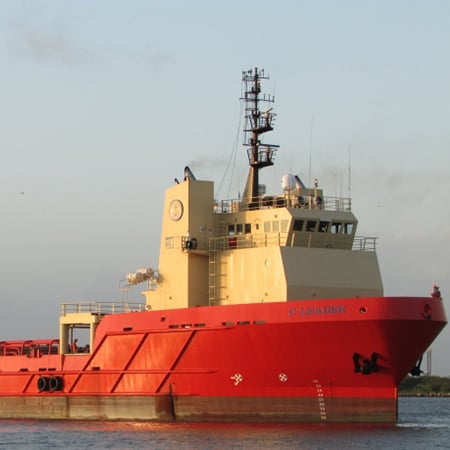 Our client was working on an Edison Chouest offshore supply vessel as a Chief Engineer. He was in charge of the engine room. The federal regulations for manning his vessel were that there were supposed to be two qualified members of the engine department (QMEDs) on board the ship at all times. But at the last crew change, only one QMED was available to come aboard. A few days into the hitch, drilling mud began to accumulate in the bilge. The QMED decided he would scoop the drilling mud out of the bilge by hand and return it to the mud holding tanks.

When our client came on duty later that day, there were several 5-gallon buckets of drilling mud in designated walkway areas, the opposite of “shipshape” and not in compliance with safety rules. Our client knew he had to get the buckets out of the way to keep the walkways clear, and estimated they would be light enough for him to carry since they weren’t full to the brim. Two buckets were half full and a third was 3/4 full. What he didn’t realize was that drilling mud weighs much more than water. As he was carrying the third across the Bulk Room to remove the hazards from the walkways, he felt a pop in his right shoulder.

He kept working since the crew was short-handed. He took ibuprofen, hoping his shoulder would get better over time. After a few days of pain that wouldn’t go away, our client reported his injury to the medic, who noted his shoulder didn’t seem normal. He was taken off the ship so he could go see a doctor.

His MRI taken a few weeks after the injury occurred showed tendon tears, subacromial spurs, and more than enough damage from the injury for our client to have surgery.

The surgery was textbook and should have helped him. He was scheduled to start physical therapy a few days after surgery but his shoulder and arm were swollen and discolored. Physical therapy over the next few weeks was painful and didn’t provide much improvement. Lyrica didn’t help much either. Six weeks after surgery, our client’s doctor diagnosed him with RSD, reflex sympathetic dystrophy syndrome. This malfunction of the nervous system, also known as complex regional pain syndrome, left our client with constant pain and an inability to use his arm much. By November, he was discharged from rehabilitation therapy having only achieved 75% of his mobility goals. His arm would never be fully functional again. He’d never be able pass an offshore physical, much less return to his career as a chief engineer.

Three weeks after the surgery, when he was realizing there was something really, probably permanently wrong with his shoulder, he began researching what to expect from his company as well as his legal rights. He contacted us about his case and hired us to help him make sure his rights as a Jones Act mariner would be protected.

Our law firm filed his offshore injury case in federal court in Louisiana, suing Nautical Ventures, the owner of the vessels, as well as Offshore Service Vessels, Galliano Marine Services, and Edison Chouest, his employers. Our lawsuit argued that our client was covered by the Jones Act, and it included claims for maintenance and cure, negligence, and unseaworthiness.

Our lawyers supported these liability allegations with a maritime expert witness and through the depositions we took of the company’s employees. The requested damages included lost wages, medical bills, physical impairment, and pain and suffering. Our attorneys supported these damages by hiring experts in the fields of vocational rehabilitation, economics, and life care planning.

The company did not offer enough money at mediation in New Orleans, so we continued to work up the case. After our continued negotiations, the company agreed to pay $475,000.