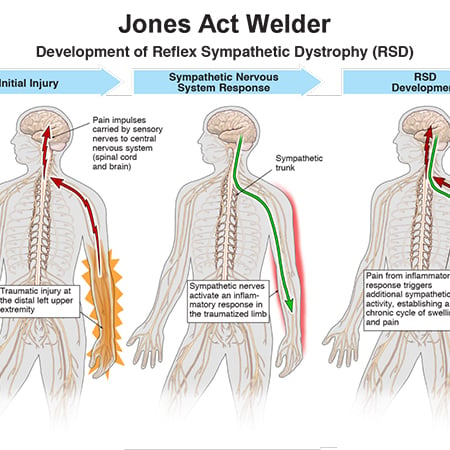 Our client, a welder, spent his life working hard. Even though he dropped out of high school to join the army, he got his GED and took classes in welding and automotive machining. He worked hard and built a career for himself.

Moving to Florida in the late 80s, he worked as a machinist for a few years before he joined the Internation Union of Operating Engineers in 1992. He got his TWIC card and his seaman’s ID from the Coast Guard. The IUOE assigned him to work on dredges and barges as a deckhand, a mate, or a welder, depending on what was needed of him.

He got married and with their two kids, they were a typical American family. They worked hard to provide for their family and put their kids through college. But one Christmas Eve, everything came crashing down.

While working on a barge for a nationally renowned dredging company, our client’s arm was crushed in an accident. On December 24, 2009, our client, three crewmates, and a crane operator were attaching a 30-inch diameter flush hose to a 1,200-pound ball flange. They had used a chain to attach the flush hose to the crane so they could lift it to connect it to the ball flange. The crane operator would raise and lower the flush hose as needed so they could reach all the bolt holes. As our client went to screw a nut onto a bolt on the underside of the pipe, the chain attaching the flush hose to the crane jerked, crushing his arm between the chain and the metal hose. He was rushed to the emergency room. He would wind up having 19 surgeries to attempt to repair the damage to his left arm.

While he wanted to be loyal to his company and believe they would take care of him, he was drowning in a sea of medical bills. Keith tried to come to an agreement with the company, but they weren’t offering him enough to cover his medical expenses.

He would never be able to work again. The 19 surgeries had given him some use of his left hand and arm, but he would face chronic pain for the rest of his life. He was diagnosed with Complex Regional Pain Syndrome. He began to have difficulty remembering, recalling things, and concentrating due to all the medications he was on and the procedures he’d been through. He became depressed and angry. He started looking for help and found us online. He spoke with Vuk about what he’d been going through and decided to hire Vuk to help him with his Jones Act injury claim.

Vuk and Sean went to work on his case. They filed a lawsuit in Florida against the dredging company, hiring Jim Dodson of Clearwater to be their local counsel. They took the depositions of everyone on the barge at the time of the accident and hired a crane safety expert to review his accident. The crane safety expert, who had more than 35 years of experience in the crane industry, analyzed the accident and noted a dozen major breaches of safety protocols that contributed to the accident.

Economic and medical experts also gave their opinions about our client’s physical and financial outlook. Forty-seven years old at the time of the accident, our client had spent the past 17 years in the maritime industry. He hadn’t prepared for a career change since he had been planning on working in the maritime industry until he retired. The accident changed all that. The state of his health would never improve, only continue to deteriorate, according to medical experts. He would need continuous medical care for the rest of his life.

Our client’s struggle with chronic pain caused by Complex Regional Pain Syndrome that no surgery or miracle drug could cure. Working to support himself and his family was now out of the question.

In 2014, his case went to mediation. There, both sides presented their cases but were unable to come to a satisfactory conclusion. Sean and Vuk continued to negotiate with the dredging company and were able to come to agreement a month after the mediation. Our client will be able to take care of his medical needs for the rest of his life.