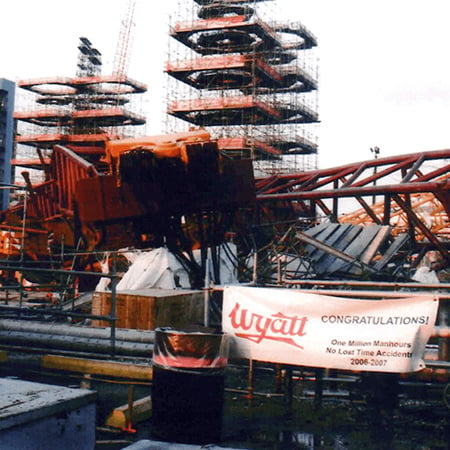 For the workers at a Houston refinery, seeing the world’s largest crane constructed at their refinery was exciting. Being able to use it was even more exciting. However, on a sunny July day in 2008, everything came crashing down. The crane’s counterweights were incorrectly positioned during preparation for a lift and it collapsed, killing four workers and injuring many others.Eight workers who suffered injuries in the crane collapse hired VB Attorneys to hold the responsible parties accountable for their negligence. A lawsuit had already been filed against forty-one parties, and VB Attorneys intervened in that lawsuit, adding our eight clients to that lawsuit, at the permission of the Court. Vuk Vujasinovic took lead on the lawsuit, arguing that the forty-one negligent parties were negligent or grossly negligent on 25 counts, including failing to ensure the safety devices and operational devices on the crane were functioning properly and calibrated on the date of the incident.The workers argued that they not only suffered physical injuries but psychological injuries as well. They claimed they suffered from PTSD due to the crane collapse. Through depositions and an independent investigation into the cause of the accident, evidence came to light that the personnel manning the crane lacked sufficient training or instructions for safely operating the crane.