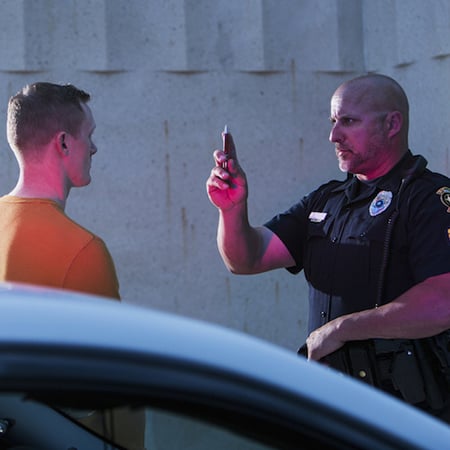 Police officer giving sobriety test to young man to see if he is driving under the influence of drugs or alcohol. Police cruiser is out of focus in the foreground.

Just before midnight on September 2, 2006, our client, a 37-year-old maintenance worker, was driving a minivan southbound on Federal Road in Houston. While he stopped at the light at Fleming Drive, his vehicle was rear-ended by a truck cab without a trailer. The truck driver fled the scene. Police located the truck driver and arrested him for failing to stop after a traffic collision. Additionally, the truck driver failed a field sobriety test.The minivan driver suffered injuries to his neck and lower back. Physical therapy failed to relieve his pain, and so he planned to undergo back surgery. After hiring Vuk Vujasinovic, he filed a lawsuit against the truck driver and his company, Cowboy Transportation, demanding compensation for his injuries and punitive damages because the driver was intoxicated.The defense team claimed that the defendant had been misidentified as the hit-and-run driver and that the driver had not actually been intoxicated. They asked the judge to suppress the evidence relevant to alcohol use, but the motion was denied.