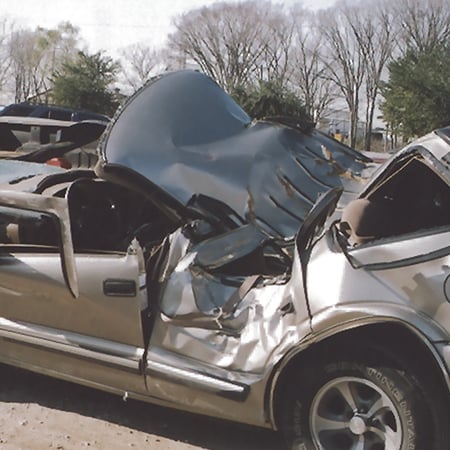 On Dec. 31, 2005, plaintiff Maria Alegria, 30s, a fast food worker, drove her sports utility vehicle into the stop lighted intersection of College Avenue and the Interstate 45 service road in Houston. She was broadsided by a sports utility vehicle driven by Julie Mai Nguyen, a 17-year-old student. Alegria’s vehicle was knocked on its side and slid into a pole, crushing the roof.

Alegria sued Nguyen for motor vehicle negligence, arguing that Nguyen ran a red light. Nguyen disputed the allegation, claiming that she had a green light.

Alegria lost consciousness at the scene and had a Glasgow Coma Scale score of 8, which improved to 15 during her four-day hospital stay. She claimed soft-tissue neck and back injuries and a brain injury with loss of memory and slurred speech. She underwent 12 to 15 sessions of physical therapy over three months.

Ngyuyen disputed the damages, arguing that there was no brain injury and that Alegria fully recovered within five months of the accident. Nguyen also contended that Alegria had no severe memory or speech problems, noting that she went back to school and got a nurse’s aid certificate.

The jury found that was Nguyen was negligent, awarding $120,295.

With interest and costs, the judgment will total approximately $150,000, according to plaintiff’s counsel.