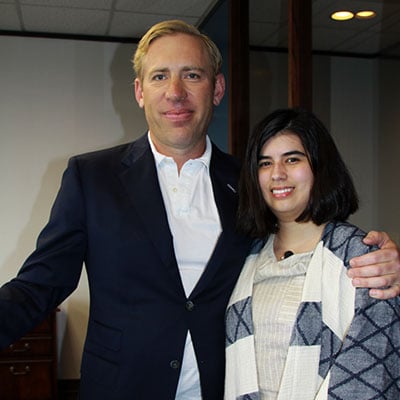 On September 6, 2004, Josephine, a customer service representative, was driving an SUV on FM 2218 near Rosenberg, Texas. Sitting in the front passenger seat was her husband, and in the rear seat was her daughter, Celeste. Celeste was 14 at the time.

Without warning, their right rear tire, a Futura Adventurer P265/75R16, malfunctioned. Josephine lost control of her SUV, it spun out, and rolled over.

Two of Celeste’s fingers were severed. She was transported to an area hospital. She was diagnosed with massive crush injuries to her left hand. She lost her pinky and ring fingers and part of her middle finger.

Josephine was also taken to a local hospital. She was diagnosed with a broken neck, though it did not result in paralysis. She wore a neck brace for several weeks and allegedly suffered from positional vertigo. The top of her head was scalped and had to be reattached. She allegedly continues to suffer neurological difficulties. She missed three months of work.

Josephine and Celeste sought unspecified damages for past and future medical expenses, for Josie’s lost wages, for their pain and suffering, physical impairment, and disfigurement. Alex Willingham and Dan Bagwell, both life care planning experts for the plaintiff, estimted the cost of Celeste’s future medical needs for outpatient physician and therapeutic services, surgery and acute care, medication and diagnostics and durable medical equipment and supplies such as cosmetic prosthetics.

Josephine, individually and on behalf of her daughter, sued Cooper Tire & Rubber Co., the Findlay, Ohio-based manufacturer of the tire, for products liability, claiming the tire was defective. The lawsuit was filed in federal court, in the Southern District, with Judge Sam Kent presiding.

Our legal team worked up the case and argued that the tread separated from the tire without cause. We contended that the tire was fully inflated, so it had not suffered any puncture damage. We hired a tire expert who reviewed the evidence and concluded that the tire should have been designed with nylon overlays to eliminate or minimize the risk of a catastrophic failure.

Cooper’s experts maintained that the tire was not defective. They argued that Josephine did not maintain the tire properly, Cooper’s counsel argued and failed to properly control her vehicle.

Two months before trial in November 2006, shortly after Cooper’s President of North American Operations, Richard Stevens, was ordered deposed, the parties settled the case for a confidential sum. The settlement has allowed Celeste and Josephine to get the care they will need in the future and for Celeste to pay for college and pursue her dreams.

Celeste has completed her Master’s degree and is in the process of buying a home. The settlement enabled her to move past the wreck and go to college debt-free. She sat down with us to talk about how lawsuit settlements can be life-changing and how accident victims need to use their constitutional right to hold negligent companies and people accountable for injuring people.