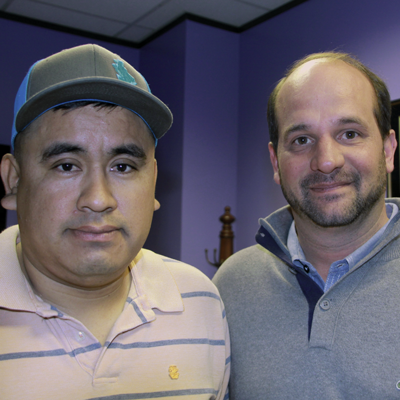 The driver who hit our client, Gildardo, on I-45 has settled Gildardo’s injury lawsuit. On a hot July morning, traffic had come to a stop on 45 when Gildardo was violently and suddenly rear-ended by a Ford 150 pickup truck.

Gildardo suffered injuries to his head, neck, and right arm. His own pickup truck had been hit so hard, his head had hit the windshield and broke it. The frame was bent, which meant nobody could get the doors open until the first responders arrived to help. He was on his way to work when the wreck happened. He missed five months of work recovering from this wreck.

Not being able to work, provide for his family, or be active seriously affected Gildardo. The moment he had recovered enough to return to his construction job, he did.

Unfortunately, that’s not the end of his story. Gildardo was raised up in a lift putting siding on a building when someone employed by a different company drove a forklift into his lift. The impact caused him to fall inside the bucket and hurt his knee, hand, and back.

Once again, he had to recover from injuries caused by an irresponsible person. Once again, he was unable to provide for his wife and three children. He was also unable to pursue his hobbies of running and playing soccer. Gildardo was an athlete. He used to play on a team that competed every Saturday and would run every day for two hours in addition to going to soccer practice. His knee hurt to run and his body couldn’t take the exertion of a soccer game any longer.

The actions of two people changed Gildardo’s life permanently. He is still unable to play soccer and has had to significantly cut back on working out. It’s affected his ability to play with his kids and do chores.

The second crash brought up an issue that we see often. When someone has been injured in the past and they get injured again, it can be hard to get help because it can be hard and expensive to prove to insurance companies and worker’s compensation carriers that these new injuries are different from the old injuries. That was one issue Gildardo faced after the second crash that complicated matters.

Gildardo’s work injury case was settled by Curtis in October, 2016, for a satisfactory amount. Curtis continued working on his car wreck case and settled it in February, 2019. Gildardo is back at work. He is determined that these injuries won’t prevent him from providing for his family.

Gildardo turned to us for help making sure the insurance companies compensated him fairly for his injuries in both cases. He is not alone. Insurance companies are supposed to make money for their shareholders. That means they see a complicated situation like Gildardo’s and try to use it to avoid paying him anything even though he didn’t cause either crash.

That’s where we come in. Curtis and his team made sure Gildardo had access to quality medical care. They also made sure he was informed about the lawsuit process and all his questions were answered at all times.

To find you how we can help you get the best result possible for your injury case, call us now at 877-724-7800 or fill out a contact form.