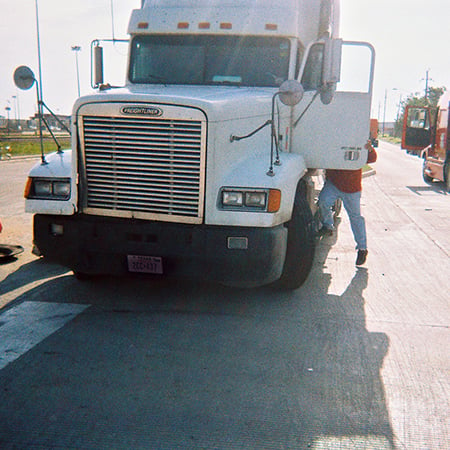 Gerardo hired our law firm after he was involved in an 18-wheeler accident back in April 2008. Gerardo was driving his tractor trailer eastbound in the left lane of East Barbours Cut Blvd. in La Porte, Texas when a tractor cut in front of him from the right lane, causing a crash. Gerardo was taken by ambulance from the scene to the ER at San Jacinto Methodist Hospital for neck and back injuries.The La Porte Police Department investigated the crash, and reported it was 100% caused by the tractor that cut in front of Gerardo, in making an “unsafe lane change.”The truck driver who was cited for the crash was on the job with Canal Cartage Company, a Houston-based transportation company with hundreds of 18-wheeler drivers on our roadways.

The insurance company for Canal Cartage denied Gerardo’s claim. The defense of this case involved all of the usual tired games and tactics played by insurance companies and their lawyers in trying to avoid taking responsibility.

We filed the lawsuit in Houston, Harris County, Texas. It went to trial and we got a jury verdict yesterday, June 7, 2021.

Amazingly, the defense refused to accept responsibility, despite the fact that the investigating LPPD officer placed 100% fault on their client. They resorted to attacking the qualifications and competency of the police officer. Fortunately, we were able to get the police report in to evidence and we called the officer live at trial, and he explained his investigation to the jury. The jury went with us and found 100% liability on the defendant trucker.

Of course, that did not stop the defense. They lodged all of the usual defense arguments that Gerardo was either not hurt at all, or not hurt very seriously, or his injuries were not caused by this crash, or his doctors over-charged him, or his doctors were crooked, or he was faking everything, blah blah blah.

The defense even resorted to hiring a neurosurgeon expert who just last year was Censured by a major medical organization for “failing to give unbiased testimony.” Fortunately, we were able to cross-examine this expert on the stand at trial and the jury didn’t buy a single thing that came out of his mouth.

We called Gerardo’s treating orthopedic surgeon to testify at trial, and admitted all of Gerardo’s medical and billing records. Also, notably, we did not make any claim for lost wages in the past or future. The only damage elements were medical bills and pain and suffering damages.

Fortunately, the jury saw through the defense’s smoke and mirrors, and entered a verdict that said the Canal Cartage truck driver was 100% negligent in causing the crash, and that Gerardo should be awarded $286,000 in damages.

Special thanks to Karen Hurwitz, a jury consultant who we used on this case. Karen did a fantastic job.