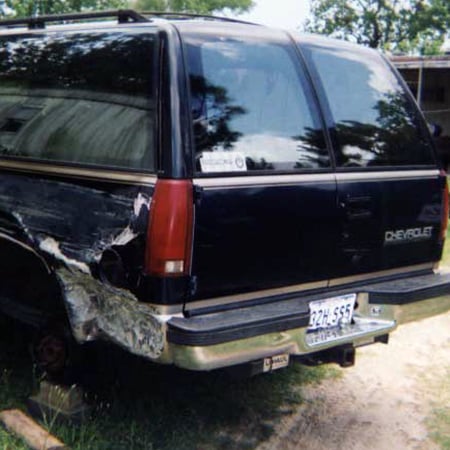 AIG (now Chartis) did not think much of Alfonso Garza’s case.  In fact, the insurance company thought so little of Alfonso’s case that it offered him ZERO pretrial after two and a half years of litigation.

AIG and the insurance lawyers it employs at Handlin & Associates changed their minds after the first day of trial – they increased their offer from zero to $350,000.  However, Alfonso and his trial attorneys rejected this offer, wanting to hear what the jury thought about the case.

After four days of trial, the jury returned a verdict of $734,191 in favor of Alfonso.

Here’s what happened to bring about this lawsuit:  Alfonso was driving his Suburban on Hopper Rd. in Houston, Texas, when a pick up truck driven by Octavio Vega sideswiped the Suburban.  The truck driven by Vega was owned by his employer, EMS USA, Inc., which was insured by AIG.

The force of the impact was so great it actually took the entire wheel off the pickup truck. Despite being down to only three wheels, the pickup truck kept going. Witnesses called 911, and a sheriff’s deputy used the foot-wide gouge marks in the road from the wheel assembly to track down the pickup truck and Mr. Vega.. He returned Mr. Vega to the scene of the accident, where Alfonso was refusing to be transported to the ER because he’d rather just go to his daughter’s and rest there.

Despite mountains of evidence against their driver, AIG denied liability and denied Alfonso’s claim.

With a damning sheriff’s report, placing the blame on Mr. Vega, it would be reasonable to think that his insurance company would want to settle the case quickly. Except they denied all liability all the way to trial.

Alfonso thought they would want to settle his claim quickly, too. He was initially suspicious when Mr. Vega fled the scene of the accident and worried something might be up, so he contacted an attorney the day after the accident. As more information rolled in about Mr. Vega – that the truck he had been driving was actually a company truck and that the pain Alfonso developed in his back, neck, arms, and legs wasn’t alleviated by any remedy, the attorney recommended Alfonso talk to Vuk about his case. Vuk made sure Alfonso saw a back expert right away, who began treating him conservatively with physical therapy and injections. After gathering more information about the case and getting the sheriff’s accident report, Vuk filed a lawsuit in May 2008 against Mr. Vega, and his employer.

Mr. Vega had been terminated by his employer because he fled the scene of the accident, however since the truck was owned by the company, AIG, the company’s insurer, was responsible for handling Alfonso’s injury claim. AIG hired a Houston firm to defend them, and that firm and AIG’s insurance adjuster made fun of Alfonso’s case. At this point, Alfonso, a semi-retired salesman in his sixties, was facing neck surgery and still seeing his doctor to treat his lower back pain. He’d claimed past and future medical expenses, as well as past and future damages for pain and impairment.

Alfonso ended up having a neck surgery about a year after the crash.  His doctors said he may need back surgery in the future.

Alfonso was retired, so he did not claim anything for lost wages.

The insurance lawyers and the AIG insurance adjuster made fun of Alfonso’s case.  They denied liability.  They mocked him because he hired a lawyer the day after the crash, before seeing any doctor.  They said he would not be accepted by a Harris County jury because he did not speak English.  They claimed a jury would not believe he was hurt because his lawyer referred him to his first doctor, and because he admitted he did not feel pain until 3 to 4 days after the crash.

After almost two and a half years of litigation, AIG and the insurance lawyers refused to mediate the case, and offered Alfonso ZERO pre-trial.  They said they wanted to try his case to a Harris County jury.

The insurance company’s offer of $350,000 came after the first day of trial, after the jury was selected.

During trial, Vuk and Sean were successful in having one of the primary opinions of the insurance company’s paid expert – Leonard J. Hershkowitz of Houston Neurology Associates – stricken.  After reviewing our motion to strike, the Judge ruled that the opinion of Dr. Hershkowitz that Alfonso did not need back surgery was not reliable and was stricken from the record.

This case is an example of hard-ball insurance company tactics.  The tactics they used in this case include:

Fortunately, our civil justice system allows someone like Alfonso to compete on the same playing field as a major insurance company. This Harris County jury saw through all of the insurance company’s smoke and mirrors.